Find total reviews of Best Drawing Tablets for Mac; in the world of innovations, something new is invented and released in markets daily. Now I’m representing one of the most valuable gadgets for professionals and domestic purposes known as the Digital Drawing Tablet and the new trend of Portable Monitors for Mac, which is typically used to transmit your current Drawing, Graphics, and Design to the big screen of a mac or any other laptop or pc.

So, if you are a professional sketch artist or painter, or architecture, this tablet is well worth it for you. The budget drawing tablets are compact to carry anywhere and easy to set up and operate. It comes with one pen to work on that pad and contains some of the most frequently used shortcut keys.

Go below and take a look at the good drawing tablets for Mac collections and try to get the best deal among them.

#1. VEIKK: cheap drawing tablet with a screen that doesn’t need a computer 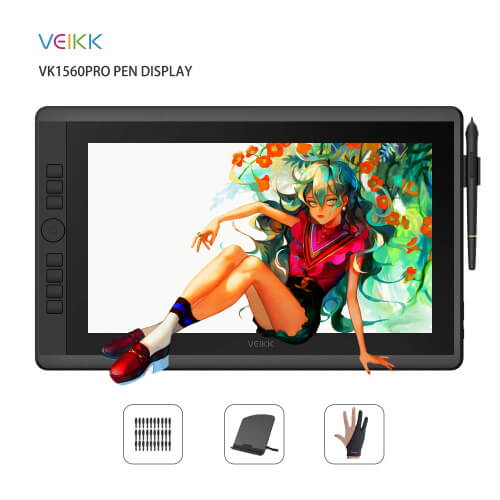 VEIKK is a leading drawing tablet for Mac to buy in 2022, with all the basic and advanced features to increase productivity as a Graphic Designer or complete the College Project before the deadline. It is no less than a laptop with a substantial 15.6-inch 1920×1080 drawing monitor; it lets you efficiently design remarkable images by showing every tiny detail that matters the most. Alongside, it has seven shortcut keys to access the feature in a single click, such as Zoom In/Out and other operations.

Enjoy your work hands-free with its independent stand; at any angle, you can set the tablet and work conveniently. In addition, since it is specifically made as a drawing tablet, you will get two battery-free pens within the set. All the major software, including Photoshop, Illustrator, Painter, Krita, Sketchbook Pro, Clip Studio, and more, works flawlessly. 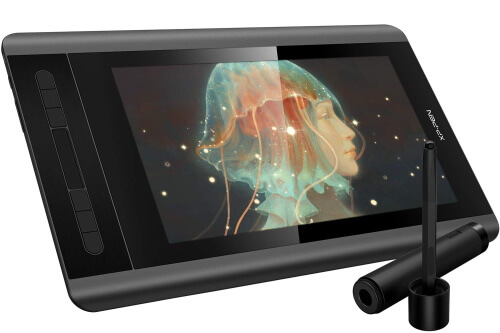 If you are a type of artist who usually needs to travel worldwide for work, then XP-PEN’s this drawing tablet for Mac is recommended. We need Mac to carry out the project stuff, so if we have a baby monitor like XP-PEN Artist12, it is easy to work anywhere anytime without wasting time. You can install Windows 7 or later or macOS 12 or higher version because, without OS, it is impossible to establish the designing software on this drawing monitor.

It features, a non-slip flexible glue grip, HD IPS Display for drawing, sketching, photo editing, 3D sculpting, and more. The only difference between VEIKK and XP-PEN is, of screen size, XP-PEN Artist12 comes with 11.6-inch, whereas VEIKK is 15.6-inch. 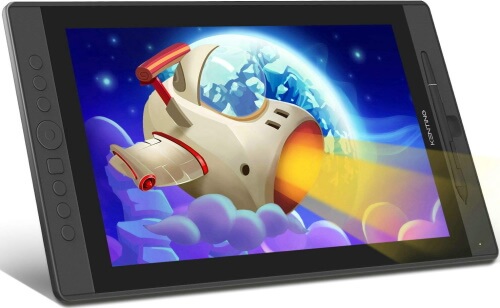 The combination of solid hardware, a giant 15.6-inch bright screen, and a flexible in-built stand forced me to list Kenting KT16 to collect the best drawing tablets for MacBook. If you are looking for a budget tablet, then, believe me, no other 15.6-inch tablet offers such excellent facilities as Kenting KT16 does. The bright side of this laptop is that it supports three cable ports: HDMI, USB, and the power port for power supply, and five menu buttons for quick navigation.

Adjust tablet at different angles from 15-degree to 85-degree, and perform editing hands-free and without screen slippage. Designers much appreciate the battery-free stylus pen; without Pen, it isn’t easy to work a single second on a drawing tablet like this. 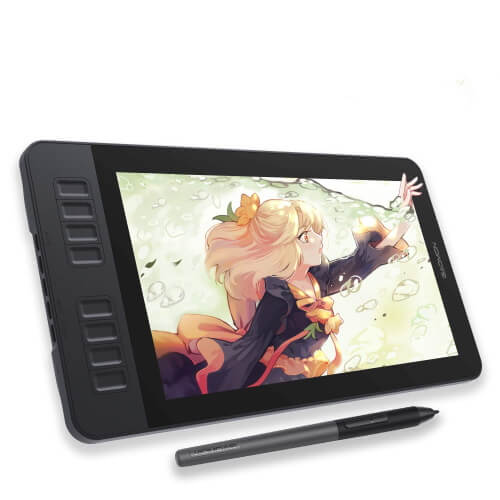 I like the way GAOMON has crafted this drawing tablet for multipurpose use with Mac and independently. It’s a fine piece with far better pressure sensitivity; that’s what a graphic designer needs the most while working on a project and, of course, the smooth texture. You can customize the eight hotkeys at your convenience. I’m pleased to tell you that this tablet’s pen doesn’t need charging, an absolute deal at an affordable rate for professional graphic modeling and 3D sculpting people.

Moving forward to its key specifications, an 11.6-inch HD IPS Display offers much better quality than essential tablets. However, you may have to look up the HDMI port converter; if your Mac or Laptop doesn’t have HDMI Out, that’s the only downside with this drawing tablet. 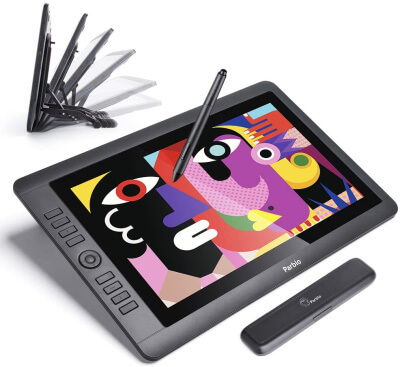 The plus point of buying Parblo Mast10 is a tuner function that adjusts brightness, contrast, color temperature, and much more editing options. Being compatible with the most popular graphic software and Mac, you won’t have to face any lag or driver issues, to work on this drawing tablet. Though the size is only 15.6-inch, it will feel like an iPad. Install the Windows or macOS, whichever is comfortable for you.

In space, you’ll get eight pen tips in a box so, if you feel a bit weird after using the stylus for a long time, take out and replace the pen tip. Also, it is packed with Mini Display Port to HDMI adapter specifically for Mac.

#6. Wacom: best drawing tablet with a screen for animation

Wacom tablet is the industry leader. Here comes a digital drawing tablet by Wacom for professionals as well as for home use. The drawing tablet has an alight color dotted surface that creates an excellent impression on others and helps bring sharpness to your work. The pen is not rechargeable, so there is no need to charge a cell, and also, you can make your drawing as per your requirements by pressing it.

In addition, you can manage pictures like to zoom or navigate by gesture control on a tablet. You will find four crucial keys on the top, such as undo or paste for easy operation while using a tablet. The size of this tablet is 8.25 X 6.7 inches which is compact for you.

Huion offers a large drawing surface of around 10 X 6.25 inches which is a great deal. Generally, it is used to draw pictures, paint, make blueprints, or make any sketch on the Mac. So it can be called as a medium of transport to the big screen with a susceptible screen and good accuracy while drawing pictures.

This tablet consists of eight keys on its side and 16 more shortcut keys on tablets visible when you turn on the tablet. It works with Mac OS X 10.8.0 or later (OS X Yosemite, MacOS EI Capitan, macOS Sierra, macOS High Sierra, macOS Catalina) and Windows 7 or later.

Artisul’s drawing tablet is released for every age of people whether they want to use it for professional work or leisure time. This thinnest tablet is operated by giving power through a USB cable, and its pen is straightforward. It contains a sharp tip and eraser for erasing.

Sometimes people face difficulty if they are left-handed while using shortcut keys, but this digital pad is designed to provide great comfort to you with its size and shape.

Ugee’s digital tablet will give you the experience of drawing, painting, and writing, or also you can chat using this pad. The tablet’s resolution is 10 X 6 inches wide, and the pencil is too responsive that it will not make any delay or chopping, and you will enjoy it.

Total, it has eight shortcut keys on the side of the tablet through which you can instantly operate on your current task. In addition, the kit contains a pen holder and eight refills with one refill remover. 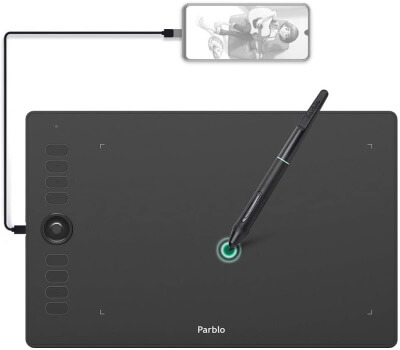 When you have a rechargeable pen, you might face some difficulty while using it, so you should buy a simple pen-containing tablet. The other advantage of this pen is you can get thickness as per your requirement by pressing the pen.

Rather than this Parblo’s, this invention is fascinating and acceptable to anyone. It has built-in 5080LPI and 220RPS chips, which lets you draw pictures flawlessly. In addition, the ergonomic design of it allows you to carry it in your bag and comfortably work on this.

Happy Drawing, Get World’s most potent and Smart Drawing Tablets for Mac in Money Value.

EXCLUSIVE: Everything there’s to know about the iPhone 15 Ultra

Difference Between MacBook Air and Pro (Check Before Buy)