As a timesaving tip we publishing in this post Cool, Good and best game for iPod touch 6th Gen. The Apple has released their new generation iPod Touch at July, 15, 2015. With the launching the iPod Touch 6th Generation with iOS 8 is became first Bluetooth 4.1v iOS device so far. Moreover as per new iPod touch features comes with Powerful A8 Chip built-on 64-bit architecture. So this kind of Chip has met with desktop Chip, since Apple said the iPod Touch 6 Gen GPU performance up to 10 times faster than previous Generation iPod Touch 5.

In Addition, you can get 6 time faster CPU performance and Metal technology that providing you great graphics performance. So what are you thinking about, let’s go at below and checkout listed Cool, Good and best game for iPod touch 6th Gen. Hope you would like gaming experience with wireless gaming controller. 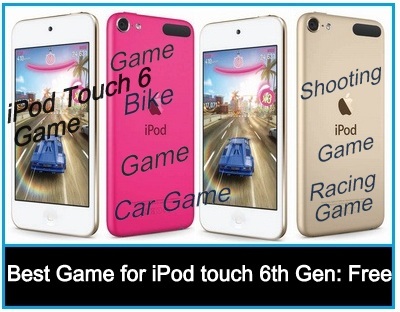 Here we’re talking about several hot favorite iOS games which became more enjoyable in both genders like boys and girls. You can be getting here shooting game, puzzle games and racing game as a best game for iPod Touch 6th Gen.

Whether here given game list text for Apple iPod Touch 6th Generation, But you can be getting these all games for iPhone 6, iPhone 6 Plus, previous iPhone’s models and iPad Air, iPad Mini on iTunes Store.

In this list you can get all kind of racing vehicles like best car racing game, best bike racing game is a best Game for iPod touch 6th Gen.

Please dear gamer share with us your experience and tell us which game you would like most to playing out of above mentioned best game for iPod touch 6th Gen and very special for iPhone 6 and iPhone 6 Plus – iOS 8.