Good Tips to Save Battery on iPhone 6S, iPhone 6S Plus

You bought an Apple’s new iPhone 6S or iPhone 6S Plus. So hope you’re running that with the latest updated pack iOS 14 or later.in the previous version of iOS, there was such a big issue of battery drain. But luckily, in the latest iOS, Apple is brought a single switch feature to save battery life on iOS devices called ‘‘low power mode’’. iPhone 6s battery draining fast all of a sudden 2020 can be resolved from this tutorial.

Indubitably, battery saver peculiarity low power mode is working well. In Addition, that gives you as much as three extra hours before the battery finally goes drain. However, through low power mode almost features happen closed (Background App refresh, automatically update apps, mail face). Since that you’ll not stay updated with some useful features. Therefore you should try to turn off some of the features as customizing. So having your question, how to save battery on iPhone 6S or iPhone 6S Plus?  Then let’s look, here I’m serving you several battery booster ways that help you to save battery on iPhone 6S or 6S Plus for the last longer and also applicable for running all iOS 9 devices. Also, you’ll learn a few answers why does my iPhone 6S die so quickly?

Tips to Save Battery on iPhone 6S, iPhone 6S Plus: iOS 14 or later

If we look at the hardware specifications of the iPhone 6S and iPhone 6S Plus, then both are equipped with 1715mAh and 2915mAh respectively. For the fact the battery life of the iPhone is totally up to you, how frequently do you use, which applications, and the network connection (3G, 4G or Wi-Fi) and your usage patterns.

Over time, using the iPhone for years, these metrics changes, for some users, the battery life increases with software updates, and for others, the iPhone battery is not less than dead.

Is it worth replacing iPhone 6S Battery?

How much does replacing an iPhone 6S Battery Cost?

For the iPhone 6S and iPhone 6S Plus without warranty or AppleCare+, the battery replacement cost is $49. Whereas, the under warranty and AppleCare+ iPhones don’t have to pay anything to replace the battery.

How Do I Know If My iPhone needs a New Battery?

Best Ways to Save iPhone 6S and iPhone 6S Plus Battery

You want to save your iPhone battery for a longer time. Then you need to disable background app refresh. Otherwise, keep it enable for selected apps. Or, wear on the iPhone battery case. 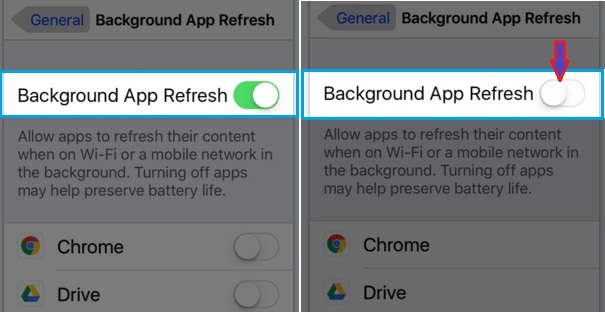 Keep always auto-update apps turn off and do manually while you get update notification for the app in App Store. This feature runs automatically when the latest version of apps released. Damn it’ a good ride to Save battery on iPhone 6S, 6S+.

The Apple iPhone has comes with an ambient light sensor that works based on the light around it. Moreover, in the dark place, your iPhone screen will need to use less power than light.

Reduce motion or parallax effect that’s a cool feature. You feeling while your iPhone is moving at the time the app’s icon on-screen little moves. But that’s also eating the battery energy of the iPhone.

Don’t enable Wi-Fi unnecessarily. That consumes your iPhone battery. You can do turn off Wi-Fi on iPhone in two ways either control center or following steps.

Please Note: if you’re an Apple Watch then this tip doesn’t apply to you. Reason Wi-Fi is required for several features of Apple Watch.

Let know do you’ve any suggestions apart from the above-mentioned modes Save battery on iPhone 6S, iPhone 6S Plus.