Apple has come a long way, every year; they introduce a new Apple Device, with updates to the older iPhone, iPad, and Mac. With iOS 14, Apple changed the way how we use the iPhone Home Screen, in earlier versions, we don’t have an ability to add the Widgets onto the Home Screen alongside the applications, but those days are long gone. In this short tutorial, we are going to discuss the most often used World Clock Widget and how to customize it to get the most out of it.

On the horizontal screen fit sized World Clock Widget, you can add four cities to know the time without launching the world clock. Despite that, give the cities a priority sequence, and much more. Why wait, let’s dive into the article and learn how to change the default city in the world clock widget. To ease the process, we’ve divided the steps into three sections.

How to Add World Clock Widget on iPhone

If you haven’t added the World Clock Widget yet, and these are the following steps to do it. Skip the steps if the world clock widget is already present on the iPhone home screen.

How to Change Default City in World Clock Widget

We have demonstrated with a large-sized World Clock Widget, that can easily fit four cities in a single card, so let’s begin.

How to Remove World Clock Widget from iPhone Home Screen

In the end, if you want to remove World Clock Widget from the iPhone Home screen, do it with the following steps. 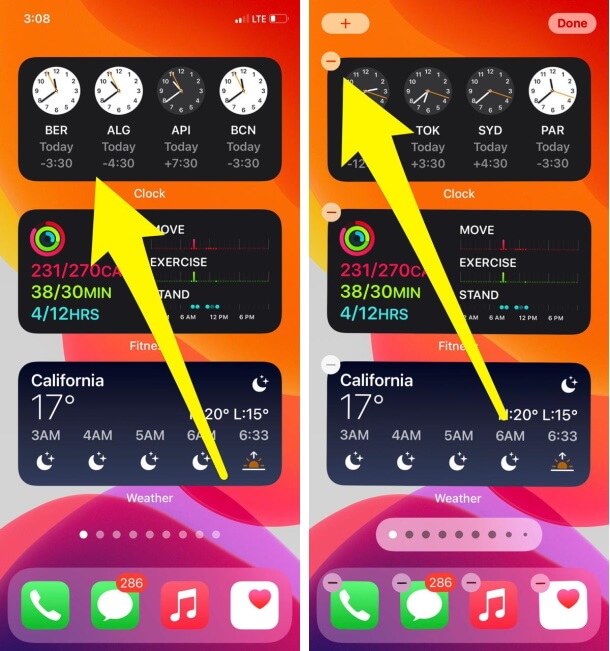 Touch and Hold Widget Card and tap Minus sign

Way 2: Tap and hold anywhere to enter the iPhone into jiggle mode on the World Clock Widget and tap the Minus sign on the upper left side of the widget to remove from the home screen.

We can Re-Add the World Clock widget to your iPhone home page.