How to Make a Folder on Apple TV 4K and ATV 4: latest tvOS 11 version

The Apple TV folder feature in tvOS 11 version. Also, many latest features including iCloud Photo library and Live photo, allows Bluetooth keyboards with the 4th generation Apple TV. Do you know how to create folders actually on tv screen? If you don’t have an idea let’s, this trick will enable you to make a folder on Apple TV 4 and Apple TV 4k with latest tvOS 11 or later updates. So, you will get a new option to organize apps around on your TV Screen.

For instance, may you have there are many varieties of games on your ATV 4 player screen? So by making a folder, you can place all games in a single folder and keep the name of folder likes play zone or games whatever they like. So ultimately, you will be able to organize apps, and it becomes easy to find any application on the TV screen by folder name wise. Go below and know the method to make a folder on Apple tv 4 (tvOS 11), rename folder, delete a folder, etc.

Step 1. Launch Home screen and highlight an App as mentioned in step 2.

Step 2. Press and hold on an app icon through Siri remote trackpad until the app icon starts to shake.

Step 4. And hold it directly over a second app icon.

If you hold an app in the right place, a folder will be created and both applications inside of the folder.

If you have plasma HDTV or any other big screen HDTV, then you can appear nine apps with the full icon in a folder. Also, there is no way in tvOS 11 to create the folder in a folder.

To rename folder name, you need a virtual keyboard on tv Screen. Though follow given steps to launch keyboard.

You can also remove an app from the folder by dragging them to any edge of the TV screen like iOS.

While you want to remove created a folder, just drag all apps outside of it, and the folder will automatically disappear. You can also move an app that is in the folder then just press and hold and get an option like Delete app, Move to Home screen, Move to the game and Cancel. 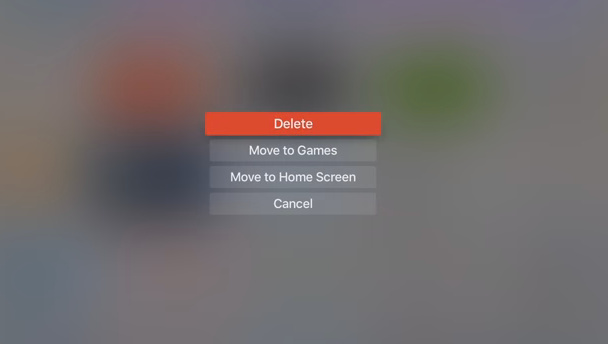 Therefore, it is a hassle-free method to create a folder on apple tv 4 and to delete a folder in tvOS on Apple tv 4th generation.

What you want more relates folders feature of tvOS 11, just leave your reply in the comment. Furthermore, don’t forget to share this way to make a folder on Apple TV 4/ Apple TV 5th Generation on Facebook, Google plus and twitter.