How to make slow motion video in iPhone with iMovie: iOS 8

iOS 8 has been enormous changes in all the functions included camera app and related app. iMovie is one of them. Using iMovie app you can make slow motion object in a video manually on that portion where you want. Here I am showing on how to make slow motion video in iPhone 6 or iPhone 6 plus or other that’s running on iOS 8 and using iMovie app. technically things is that any video stored as a frames. And the rotating frames works as a video. Now here to make slow movie or video in your iPhone you have to decrease frames per second (fps) ratio. For the best camera have highest fps rate. fps ratio gives perfect resolution and high clarity picture also. In iOS 8, iMovie gives option to change fps rate for your full video or portion of video easily.

Let’s see how we can change fps rate for video using iMovie app in your iPhone, iPad running on iOS 8. From old iOS we can also do this but not same that we can do in iOS 8.

Useful: How to Send photo/video from iOS 8 message on iDevice.

Steps to make Slow motion video in iPhone and iPad: iOS 8 – How to

From your screen, Tap on Speed modulation icon like speed meter. 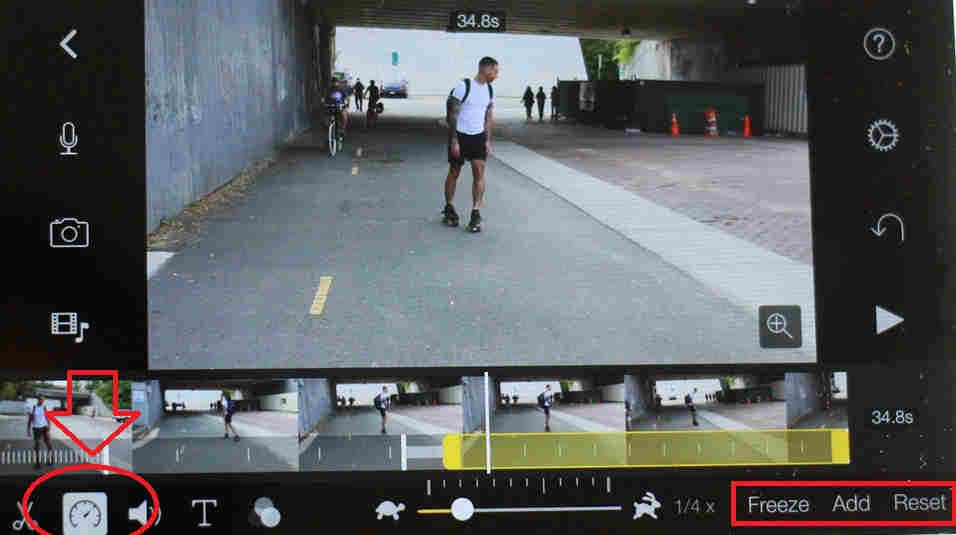 Now you can see two controls first one is yellow bar on frame. And second is slider.

Other options are Freeze, Add and reset in the same screen.

From this screen you can also cut frames means remove portion of video easily by tapped on scissors icon.

Useful: How to Send photo/video from iOS 8 message on iDevice.

What you say about iMovie in new iOS 8. Don’t miss to rate on Make slow motion video in iPhone and iPad on iOS 8 by comment in below. As usually any problem and suggestion related to this tips please comment in below.