Facebook’s owned WhatsApp app updated for the iOS device, Very useful and New features added with bookmark your favorite message by starred it. here you can learn how to star a message in WhatsApp iPhone app and remove (Unstarred it). Starred message you can use for later read or use as an important note like contact number, Address, Photos, and Videos.

To use this feature you have updated WhatsApp version. First verify, By manually update an iOS app or Set Auto updates for upcoming new updates on other apps.

Steps for the starred message in WhatsApp iPhone: Bookmark or Save text

Step 1: Go to the WhatsApp app, And Open it.

Step 2: Tap your recipients (Friends name) from a chat screen. Tap and Hold message that you want to bookmark/ Starred or save in WhatsApp app. 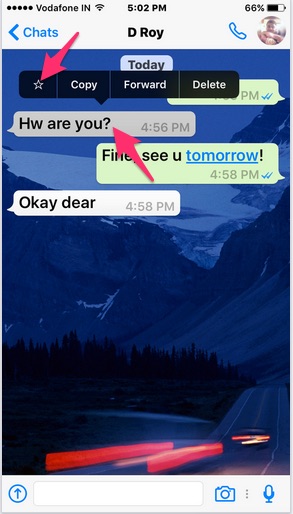 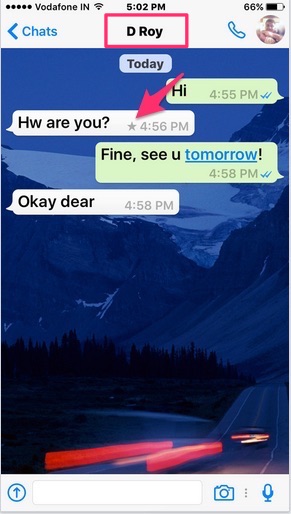 Step 3: Your saved message will be saved under the recipients’ profile > Starred Messages. 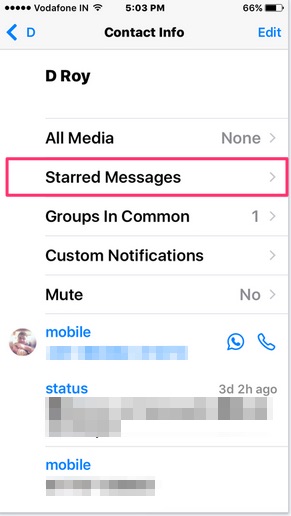 The message will be listed with a date and time format. To see a message in chant conversation tap on it.

Tap on hold on the message that you want to remove from the starred message list, Then tap on star icon from the popup list. See in below image. 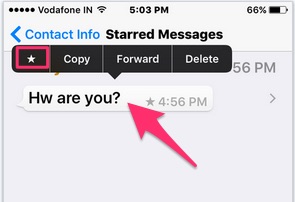 Remove starred message from WhatsApp: Don’t choose to delete option from the popup menu, Otherwise, it will be removed chat conversation that’s you never restore or get back.

The starred message will be not removed but start icon only notify that, You have bookmarked this message for high priority as a reminder, Notes and Easy to forwarding, Copy to other apps and mail.

More other useful tips on WhatsApp or other tech apps kindly stay in touch with us on social media or comment on below for more help in your case.

hope that your all queries on starred Whatsapp message like Where to show all starred message in WhatsApp iPhone app, How useful Starred message.

How to Connect AirPods to Mac, MacBook in 4 Ways (Ventura)

How to Connect Mouse to Mac in 4 Ways (macOS Ventura)