Let’s know iOS 10 Compatibility Devices list. Cupertino, California-based tech giant Apple will be released its next iOS upgrade in September 2016 (coming fall). Before that, According to the tech news, Apple has announced its next edition iOS at its annual Worldwide Developer Conference (WWDC)  June 13th, 2016. The new version called ‘’iOS 10’’. WWDC is the most important event of Apple, in them, it gives awards to developers, obtains new ideas of developers who attends keynotes around the globe, get about new SDK concept and design, in addition, the debate on Mac OS X, Apple Watch operating system WatchOS, and TvOS.

Keen iOS users want to upgrade their Apple iOS devices, but before trying to upgrade to iOS 10, you must verify that your device is compatibles with iOS 10. So Today, here we will talk about the most important information for Apple iOS users and that’s an iOS 10 supported devices. We hope compared to the past years, Apple would be given more advanced features likely Apple will enable Siri to caress third-party apps, More useful iMessage features, revamped Photos app and more iOS 10 features.

Generally, there are three major Apple’s iOS devices iPhone, iPad & iPod Touch which are running on a common operating system and that’s an iOS. We can know below all iOS 10 Compatibility Devices models name. 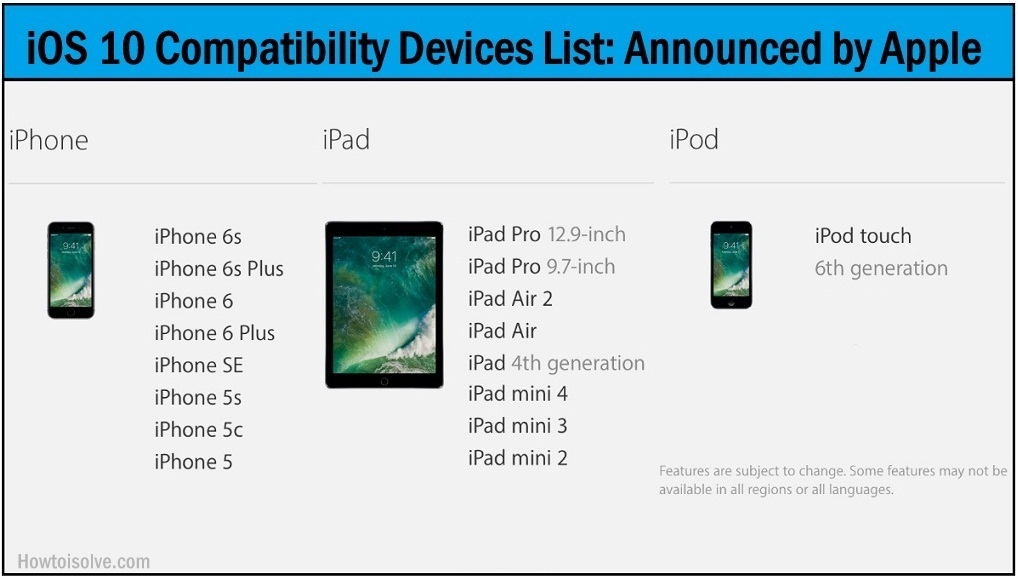 We know that the millions of iOS users worldwide won’t get the chance to update for iOS 10. Therefore definitely, they would be feeling disappointed. If you’re one out of them, Don’t worry, you should upgrade your iPhone and buy in-your budget iPhone SE to get and use latest iOS 10 features, live Photos, 12Mp camera. So above give list through you can know that your device is iOS 10 supported devices or not.