Apple has been announced their upcoming iOS 9 Compatible devices list in Keynote June 2015. So we’re sharing here a list, hope it’ll be the answer to your question. Which is Apple devices will compatibility with iOS 9?

You should forget a terrible battery life problem of iOS 8, in iOS 9 you’ll able to get better battery life than iOS 8. 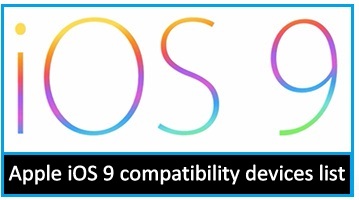 Even though, if we’re talking about the iPad and iPod touch, then

Above you’ve seen iOS 9 compatible devices list. So let now we check out the overview and new features of iOS 9.

Apple iOS 9 massive change and added something new likely changes in Siri would be able to give perfect result whether you ask something. For example in iOS 9, you can search your photos, Videos and much more through Siri ‘’show me photos last month’’ then. As a result, you’ll get entire Photos of the last Month.

You can be set essential reminders using Siri, get needful Siri assistance and proactive suggestions and Search, Music lovers will be playing music with lock screen iPhone, iPad and iPod touch on iOS 9.

In iOS 9, Get big foundation likely improved Security, Faster performance, longer battery life and helpful updates. Moreover, you’ll get innovative News app on your iOS devices Home screen. Passbook app renamed as ‘’Wallet’’, redesigned Notes app ideal for jotting down your thoughts. Now you can sketch with your finger in the notes app. you can make a checklist function of to-dos. Ultimately, you can access your notes everywhere through iCloud. Great Multitasking feature for iPad users, iOS 9 allows open tow apps at once mean as the Split view.

How seems this article on Apple upcoming iOS 9 compatible devices list? Just leave your tone in the comment box; please keep in touch with us to more about upcoming iOS 9 such as how to upgrade from iOS 8 to iOS 9 in iPhone, iPad and iPod Touch very easily.