Last time I am in a big problem when my iPad pro doesn’t turn on for many reasons, that time I don’t know but I apply some tricks that work for me and my iPad Pro. This blog post also helpful on problems like iPad Won’t turn on after Update, iPad isn’t wake up and responding, iPad Not Charging, Why my iPad Charging Slowly.

Steps are same for any iPad generation model. Charging is biggest issues in this case so your iPad won’t charge or turn on.

Are you playing a game, Watch Movies and Listen to songs deeply drained battery, So you can’t full battery like iPhone. 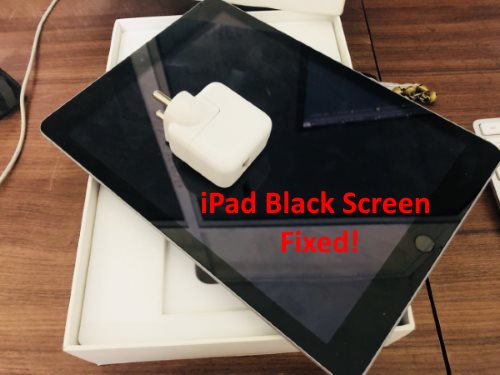 Output Current/Voltage capacity is a huge difference between iPhone charger and iPad charger.

iPhone Charger has: 5 volts and 1.0 amps

Don’t use any third-party charger or lighting cable.

identify iPad is charging or not when Screen is black

No, Any Side button works and responding to turn on your iPad. That means charging issue. Plug your iPad at least 15 minutes if you haven’t used for many years.

Right Sign: If a power supply is passing out on iPad, you will see battery icon only on black screen.

Your iPad is turn off itself and crashing issue, that update iOS if available.

Open iTunes on Mac or PC, Connect your iPad to iTunes via lightning cable.

Go to Summary Page > Tap on Backup iPad under backups.

Thank you for visiting us, Get more update and tips let’s discuss in the comment box. Share useful tips: iPad Won’t Turn On or Charge after Black Screen problem.