All about Apple’s new iPhone 6S Price At&t, T-mobile, Verizon, Sprint. The Apple has unveiled iPhone 6S and iPhone 6S Plus in their last event at Sep 09 2015. And September keynote was the really biggest event of the company at San Francisco (USA). Because they introduced more than one products on a single stage Such as latest Apple TV with TV OS, Some of new models of Apple Watch’s, the Bigger Screen iPad Pro (12-inch) most useful for Medical field and the high powerful built-in A9- Chip and 12Mp iSight camera iPhone 6S and iPhone 6S Plus with iOS 9.

So out of all you want to know here iPhone 6S Price At&t, T-mobile, Verizon or Sprint. So I’m going to presenting here contract iPhone 6S Price and it’s vary then Unlocked iPhone 6S. 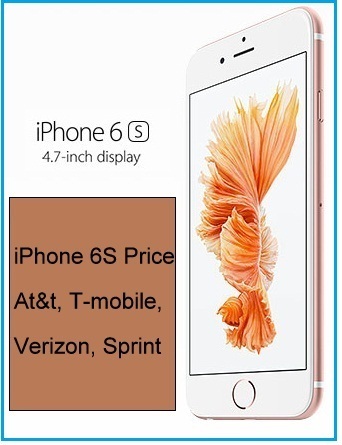 At&t iPhone 6S Pre-order begins September 12. Online at 12.01 AM PST. On AT&T’s website, and alternatively AT& T will begin offering all models in stores on September 25.

iPhone 6S Verizon contact price will be cost about $27 per month.

Sprint iPhone 6S contract price will be start about $22 per month for 16GB model.

I will update this post as soon as possible while we get real contract iPhone 6S Price At&t, T-mobile, Verizon, Sprint. So please keep in touch on this page.