All about share a live video on Facebook iPhone. The California-based company Facebook rolling out a new feature in its Facebook app for iPhone users. The new Facebook feature called share live video. Definitely, share a live video feature FB app that makes it easy for musicians, politicians, athletes, and other influencers to talk with their fans and each other. You can explore these all real-time broadcast from public figures you follow in your News Feed.

The newly added feature is amazing, so let learn here, how much long live video and how to share a live video on your Facebook Timeline via iPhone.

Step 2. Tap on Update Status from your news feed or Timeline on Facebook

Now you can write an optional description for your broadcast and choose the audience that you want to share a live video before going live.

Note: Your broadcast (live video) can be no longer than 30 minutes.

Step 5. If you want to end your broadcast then just tap on Finish. 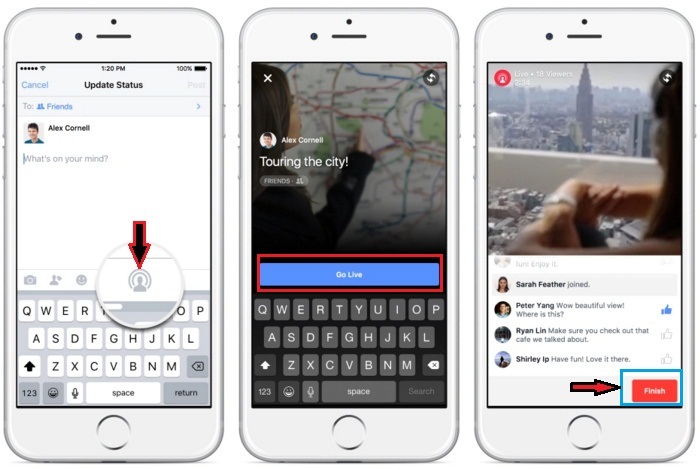 The video will be saved as like save any other videos. In addition, you can then delete or keep for your Facebook friends to watch later.

You can see the number of live viewers during the live video broadcasting within it, you also see the name of friends who are watching and direct stream of live video.

Block someone feature also included so when you want to block someone during your live broadcast, then tapping on profile picture next to a viewer’s comment and then tapping on a block. As well, you can unblock those peoples who are previously blocked.

Okay, get enjoy now this awesome feature Share a live video on Facebook iPhone. And we hope, the facebook will give more new features in future.

Sometimes users reporting issue concern facebook live not working on iPhone so that time you should update your FaceBook App and then try again.

in case the problem persists, please force quite Facebook app and then launch again and test.

Many times, due to an outage, some of the features or full FaceBook down and so that problem occurs.