Are you missing winter season and your most loving season then you can keep atmosphere around you like snow fall by set Snow fall effect on iPhone, iPad and iPod device in free of cost with this jailbreak tweaks. Not just wallpaper but you can feel animation effect on snow fall. For that you must have jailbreak iOS device. Alternatively you can also use Best wallpaper apps for your iOS device.

Step 1: Your device running on iOS 7, iOS 8 then you must have jailbreak iOS device and install Cydia on it.

Step 2: Now, from the Cydia store, add source By Tap on Source from bottom tab options.

Step 3: For that you have to enter Cydia source URL: Cydia.taskinoz.com as a source

Step 4: Next, From the Cydia app search you are able to find Snowfall tweaks: SnowScreen

Step 5: Now for extra effect like falling snow over the air and animated feeling you have to install one extra app with name: SBHTML

Now you have to do some basic settings and enable it for your iOS device screen.

Go to the Setting > GroovyBoard > And Enable tweaks for Snow fall effect on iPhone, iPad or iPod where you want.

And the option vary users requirements like number of snow particles wants to display on the screen, on which time you want to show snow effect, Time clock over the screen.

This jailbreak tweaks quite clear for your operation to do when it’s active, because snow fall effect doesn’t cover the front of app icon or other place when you are active to do from the user interface. 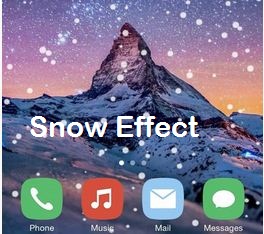 Other Best iOS 8 Jailbreak tweaks must have in iOS 8 device. And for iOS 7 Jailbreak

Want to try another same jailbreak tweaks and finding other most effective tweaks for your iOS device than message us on comment box. So enjoy your winter, summer and Christmas special celebration by Snow fall effect on iPhone and other apple device.