How to Use Drag and Drop on iPhone

The Apple hopes Drag and Drop immersive touch experience and iPhone/iPad made a clutter-free from move one app at a time from one screen to another screen. Besides, Move photos from album to album. The interesting thing I pretty like that the Apple’s new documents manager Files app supported ‘’DaD’’ (drag and drop) and Apple Maps, too. So let me know the guy, I will teach you how you can use Drag and Drop on iPhone running on iOS. Easy enough just you need to read my tutorial then you can do yourself.

Before getting started, you need to know what you should have to use this user attention feature.

How to Use Drag and Drop on iPhone iOS

First, I will teach you how to move multiple Apps on the iPhone home screen and the second is how transfer files from one location to other location in the Files app in sequence. 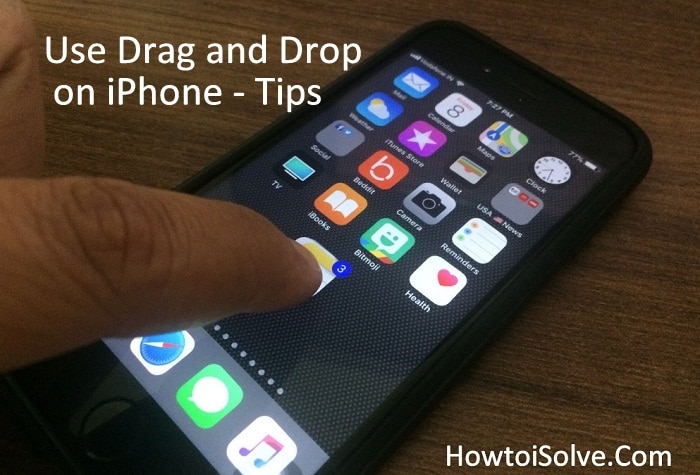 Step #2. Now choose any app then tap and hold on it until the jiggle (X) mark.

Step #3. Let’s move an app little then pick up other app and drag it on the first one.

Step #4. Next up, move this bunch of apps to another screen where you want to place.

How to do I remove Apps from a Folder on iPhone running iOS?

To bring app out of the folder that process is quite easy and the same as like we did in previous iOS (iOS 10, iOS 9).

Step #1. Tap on a folder from which you want to take away any app.

Step #3. Continue to drag the app out of the folder.

The folder will stay exist even if you keep an only single app in it.

Use Drag & Drop in Files App on iPhone

Open the Files App from your home screen. Tap on browse tab appears at the lower-right corner. Now choose a location where your stored file. For example, here I’ve taken DropBox. Now, locate the folder or file that you want to move. Then touch & hold it. Just tap on back switch see at the top-left corner and then drop the file onto or head into your desired position where you want to save it.

For better use read my free hint: Keep holding on the file with your one finger and use your other finger to explore from one page to the other to navigate the folder to drop the doc.

Useful – how to Add Dropbox to Files App in iOS

Do you want to Use drag & drop in Photos App on iPhone in iOS?

Open the Photos App on your iPhone running iOS 11. Next, tap on Album appears lower right. Now open an Album which is created by you, then tapping and holding on a picture with a finger and by other finger choose other images to transfer mass photos in another album.

Stay tuned to much information on iOS drag and drop for other applications.

Do Cooling Pads work for MacBook Pro? Get Answer Here