Quickly check out the best AR Games for iPod Touch 7 Generation. Compared to previous iPod Touch, this time Apple has upgraded iPod Touch 7th Generation to the next level. Almost every high-end functionalities are included like the iPhone and iPad. Talking of high-end features, the good news is iPod Touch 7, now has a great support of AR, which means you can play AR games in iPod Touch 7 because of A10 Bionic Chip.

However, if you do not have an interest in the iPhone or iPad, the iPod Touch will fulfill your requirements on the go. Let’s take a look at best AR games for iPod Touch 7.

There is nothing to say about Pokémon Go, as you are very well aware of this game. This game is a perfect example of AR games. Walk around the grounds and catch your favorite Pokémon to grow Pokémon collection and so your Pokedex will get complete. Besides, it also features Raids, but for this, you need to team up with your friends or other players, and battle hard against your competitor. The downside of playing Pokémon Go on iPod Touch 7 is, you will need an internet connection always, to play the game. I would recommend you to carry some other phone and connect the iPod with their Hotspot.

2: AR Robot: Build Your Bot and Fight online or Offline 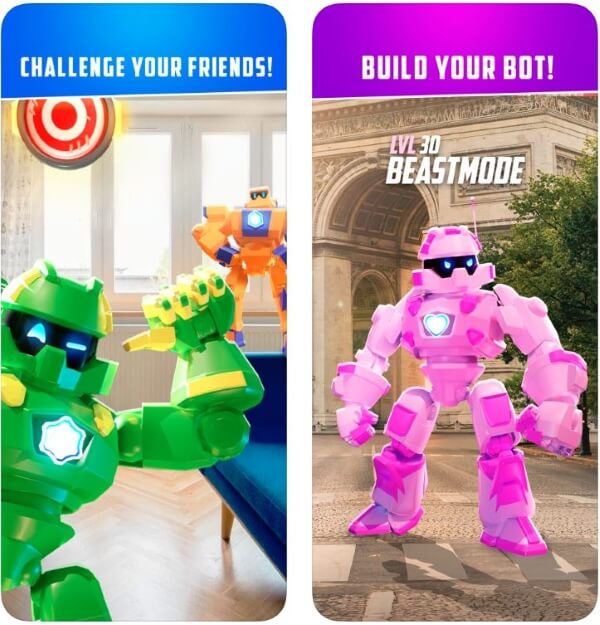 AR Robot gives you a chance to use your skills and build your own robot with unique abilities. After that, the Robots will fight the battle against your friends online and chase the leader board. Around hundreds of robot, parts are available to customize your Robot, over 100million combinations are possible can be made with available resources. It is available free of cost, but if you want to upgrade some abilities, then buy a subscription.

You are the survivor of the distant planet living in the deadly colony who is fighting against a corrupt system to get the card to earth. On the puzzle grid, you have to position your team and power up special abilities to compete on the puzzle grid, which is eventually a battlefield for you. I bet you have never played this type of game with such twists and tactics. Download this game and get your Ticket to Earth!

It’s challenging to explain ARise in words unless you play this game on your iPod Touch 7, you won’t get how this works. This game includes pint-size adventurous puzzle and based on your perspective, you can create the path that isn’t present. However, when you stuck somewhere, plenty of cues are there to get you out and move forward. As it completely works on AR, no need to swipe or touch to play the game.

The Machines for iPod Touch

The Machines is probably the best AR game available in the App Store. It offers plenty of machines and mechs to defend and win the battlefield. All you have to do is, wait for a chance to use the unique abilities of characters and destroy enemies in a single shot. This is how you can climb the leader board and earn victory against warlords.

ARia’s Legacy is a fully immersive AR game that allows you to scan nearby area, and then it creates a virtual environment and develops the game. It doesn’t display objects on the table, with the help of AR, you have to discover the objects that were never before. You are an archeologist and looking for artifacts at your site, and that’s how the story goes. I don’t want to spoil the story, so play yourself.

Above all are the very interesting and funny AR Games for iPod Touch 7 that will keep you busy in free time with full joy and entertainment even your Kids anywhere and anytime. This is the Best Indoor and Outdoor game for iPod Touch 7 that’s compatible AR Technology (Augmented Reality).