In our iPhone, we can create as much as photo album in Photos app, to store the pictures as per occasions and the same photo albums could be deleted. While doing so, iPhone & iPad users have reported that they are unable to delete an album from Photos app. For them, there is no such glitch or system fault, that will stop you deleting photos or album from Photos app on iPhone. Don’t try to delete the default albums like All Photos or Camera Roll, Recents and Favorites, as they cannot be deleted from iPhone.

Another noteworthy point is, when you delete an album from Photos app, the pictures of that album will still appear on All Photos album. That simply allows you to remove the unwanted photo albums to reduce clutter without deleting the photos from the device. iOS doesn’t have any direct option to Delete the album, rather you have to select Edit and then the only album can be deleted from iPhone.

Delete an Album from Photos App on your iPhone, iPad

Note: If you want to delete the albums from the photos app, in order to free up iPhone, iPad storage, then deleting albums isn’t enough, you have to delete the photos from the Camera Roll to remove them permanently. Once you put your Album tab in Edit mode, You can Delete, Rename Album name by tap on the name.

Learn how to delete the album/Folder from photos app, with our stepwise guide. 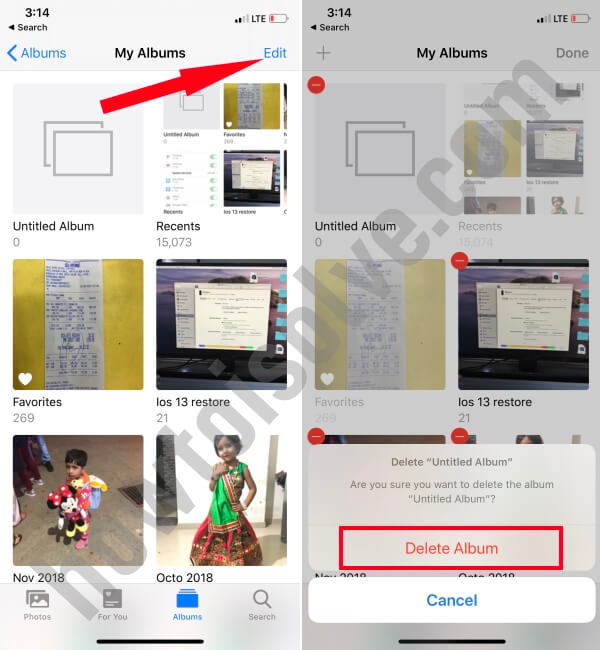 In the Same Way, iPad users can organize all custom created photo album on iPad Photos app. After Delete album, Album can’t rollback. Removing Album will not delete a photo from the camera roll. if you are looking for Delete Album or Folder on your iPad Photos app. Follow the same steps. and Remove that you want.

Follow this to share photo album with your friends on iPhone, and android mobile. After, Create a New Album on iPhone, iPad.

How to use Spatial Audio in macOS Monterey on Mac

How to use Live Text On Mac in Photos: macOS Monterey & Older

How to Create a FaceTime Call link in macOS Monterey? With Screen