How to Downgrade Apps on iPhone, iPad and iPod Touch?

I found too many alternate tricks that worked in the past for downgrade app using iTunes on Mac or PC. Officially apple isn’t allowed to install lower version of app re-install after update to the latest version. People are moving back to the old or past version of the app because of facing serious issues like Apps keep crashing on Startup, Won’t launch the app and iPhone move in to restart loop, App crashing iOS.

If you have been looking for a solution of how to downgrade iOS applications – snapchat, Facebook, Instagram, Twitter and many other apps and games running on iPhone iPad and iPod Touch. Profound alternative ways to downgrade iOS apps from current version installed on your iOS device.

And the smart and ideal solution for this problem is Downgrade installed app on the iOS device.

In recent update you cannot downgrade the app on iPhone because of app option is hidden in iTunes side pane in iTunes 11.7.4 or later version.

No, Right now there no option for downgrade or sync old version on the app from old backup in iTunes. 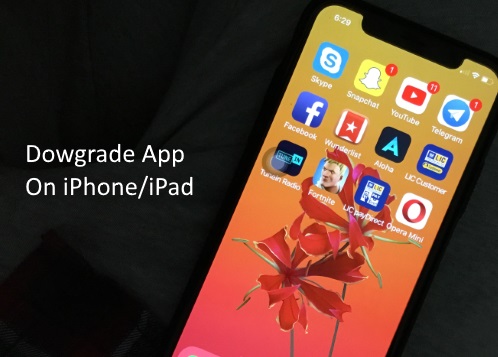 What worked in the past for Downgrade Apps?

Steps for downgrade app on your iPhone

Step 1: delete the app from your iPhone.

Step 2: connect your iPhone to the computer using iTunes via lightning cable.

Step 3: don’t update an app in iTunes or backup and sync iPhone to iTunes.

Step 5: select the app that you wish to downgrade.

Step 6: On the apply button to make changes and start sync to install old iOS version for iPhone.

The old version of app speed to your iPhone from your computer that has been saved as a backup in the past.

A second thing is this; the app is updated on your iPhone and items as well. Go to the trash folder and find the old app version file. Find the file with extension ‘.IPA’

Select the file and drag the file to iTunes. iTunes will alert you about on wish to install the old version of the application by replacing the updated one.

Share this tricks and tips on downgrade old version of the app on iPhone, iPad if you have any alternate tricks. We will update you shortly if you are unable to run the job on your iPhone.