How do I activate Siri on my Apple Watch? Here’s Complete Guide

Apple Watch has been released with innovative, unlivable features and with of Apple watch app. Moreover, they provide customize any number of beautiful faces for watch user. You can change Apple Watch faces using Force Touch.

Siri is a sophisticated thing; it has always been ready to do work as per user request. Either it’s on Apple iPhone or the Apple Watch. So let’s know, from beneath step how to wake up Siri on Apple Watch? You can wake up Siri on your using your Voice and Apple Watch as manually.

Step  1. Hold on Apple Watch in front of your Mouth 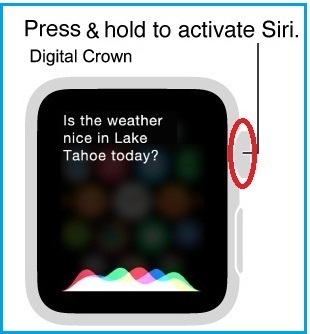 Step 3. Ultimate, you can pass your request to Siri

Know here what you can do using Siri on Apple Watch?

By using Siri app, you can set up alarm clock, to make note, make the call, Set all kind of Reminders through your Voice, To Set Timer, useful for Apple Watch Workout app and Find direction and location on Map. Moreover, you can also get an update regarding Stocks.

in watchOS 5 or later you can also use Apple Watch raise to Speak feature on the go.

Hey, Dear apple watch user how seems this tip regarding, how to use or activate Siri on Apple Watch.