Is your iPhone 11 won’t turn on and suddenly gone away in black screen or Won’t Charge. Find the perfect solution for your case. Here are the five resolutions that Apple is recommended and works on our iPhone techie guys in our team. First case people are facing issues after not used for a couple of weeks and Not Charged the Secondary iPhone. Number two case people are Unable to charge iPhone 11 and Turning off that showing black screen only also Doesn’t respond side button and it’s completely dead. Third Case people affecting the issues of My iPhone 11 Won’t turn on after iOS update or install a third-party app, So iPhone 11 restarting boot loop again and again on App launch or Unlock the iPhone.

If Any of the solutions not helpful for you, then you should send your iPhone to the service center. That apple company will officially diagnose the black screen problem that happens with your iPhone.

iPhone 11 Won’t Turn On After Update

Your iPhone 11 has not enough power in your iPhone battery so that can start itself after long days dead conditions. Now the first requirement is that supply the power to your iPhone using Apple’s original Lightning cable that fills the power in a short time [25 to 30 Minutes] after plugged into the socket, without damage the iPhone in a short time your iPhone will wakeup itself. The image below shows that your iPhone is in connection with power and charging the battery. Sometimes the faulty or Broken Lightning cable is doing disconnect the process like Update, Restore, Charging. 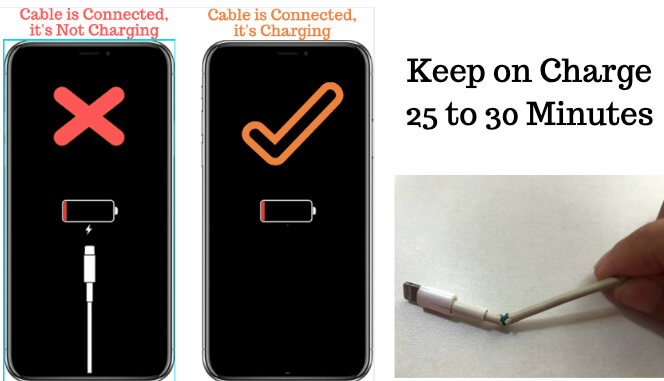 Then follow the next solution. That process is Soft Turn on or Hard Reboot.

We are suggesting force restart iPhone 11 because it might be possible that it is stuck on the black screen, if it is the case, force rebooting the device would work and turn on the iPhone. This will close all the background services, relieving the load from the processor; hence there are good chances of fixing the problem.

Hard Reboot is a simple technique that we can try on any Smartphone. So Hard Reboot fixes the software issues and Clean up all Process cache, That Gives fresh startup. After that, we can take different actions like the App and iOS update, Restore or delete the app that causing the issues of Not turning on the iPhone.

To Hard Reboot your iPhone use Three Keys combinations, Volume Up button, Volume Down button, and Side/Power Button.

After reboot, Unlock the screen using a passcode to authorize access [Face ID or Touch ID will not work after your iPhone restart or Reboot]

Its better to borrow a wireless charger from neighbor or friend just for the checking purpose if you don’t have any.

Install iOS in Recovery mode will erase the device and install a new iOS setup file that’s bug-free and repair the existing folder system that disturbs the file system that was affected with the Third-Party apps. So you are facing the issues like Battery Drain too fast, Crashing App, and your iPhone Rebooting itself. After a few days, this process internally damages your device as well.

For the Developer and public beta iOS users, Apple Not recommending to install Public or Developer iOS version on your primary device, because you might be lost the device after internal hardware damage is a few days.

Here’s the process to install iOS 13 in Recovery mode

The restoring process is different for different MacOS versions and PC right now. Because Apple Remove iTunes support on macOS Catalina or later macOS. Earlier macOS and Windows PC users can use iTunes to Restore iPhone/iPad.

Put iPhone 11 in recovery mode to restore, Use iPhone’s side buttons combinations, Use Volume Up, Volume Down button, and side button.

Popup has two options first is update and the second is restore. Second Restore button erase the device [You will lose all data and Restore Backup after that using Backup if you have taken earlier]. Go with next Restore type, If your iPhone won’t detect on iTunes/Finder from the Recovery mode then DFU Restore iPhone.

Update option in recovery mode update iOS device only, That will not erase the data. Use this option if you know that your iPhone 11 is affected with the Outdate iOS version, and Apple Release new update for bug fix but your iPhone can’t install.

Solution 6: How Apple Can Help! & We Are After iPhone 11 Won’t turn on

Apple Says customer satisfaction is awesome Because apple Gives free replacement and repair service at the apple store. Before that, you can also ask online Chat or mail. A free Phone call at the service center is also phenomenal, To raise your ticket online Apple Customer agent will ask a Serial number of your device, Current OS Version, and Total Duration that affected the problem. Along with the apple help, You can also submit the problem with us at here, Fillup the few details about your device and your location that we analyze from our end, we are back soon with proper suggestion and solutions.