How to Disable/Enable Siri for Third-Party Apps on iPhone, iPad, iPod Touch

Apple’s intelligent Assistance Siri integration has extended for third party Applications. By the way, now your iPhone, iPad or iPod touch running latest iOS Non-Apple applications (for example, like Whatsapp, Square, Skype and much more) can work with Siri.

Recently, there are several third-party apps have been updated by the developers. (Important Feature in Gmail app, Ask Siri to send mail in Gmail app directly using Siri.) Therefore, whenever you get an update for installed apps, then please update it and hope you would get in Siri’s support in the new update. By default, App is to be disabled for Siri support. Hence, you will have to enable the first to access App data with Siri. Following steps through you can Enable Siri for Third-Party Apps in iOS/iPadOS on iPhone, iPad and iPod Touch.

Update your iPhone, iPad to the latest version of iOS and iPadOS. Now you find the newer settings for Siri restrictions for the particular app. A very important way to use Siri Shortcut for Send mail in the Gmail iOS app.

Older Version of iOS on iPhone 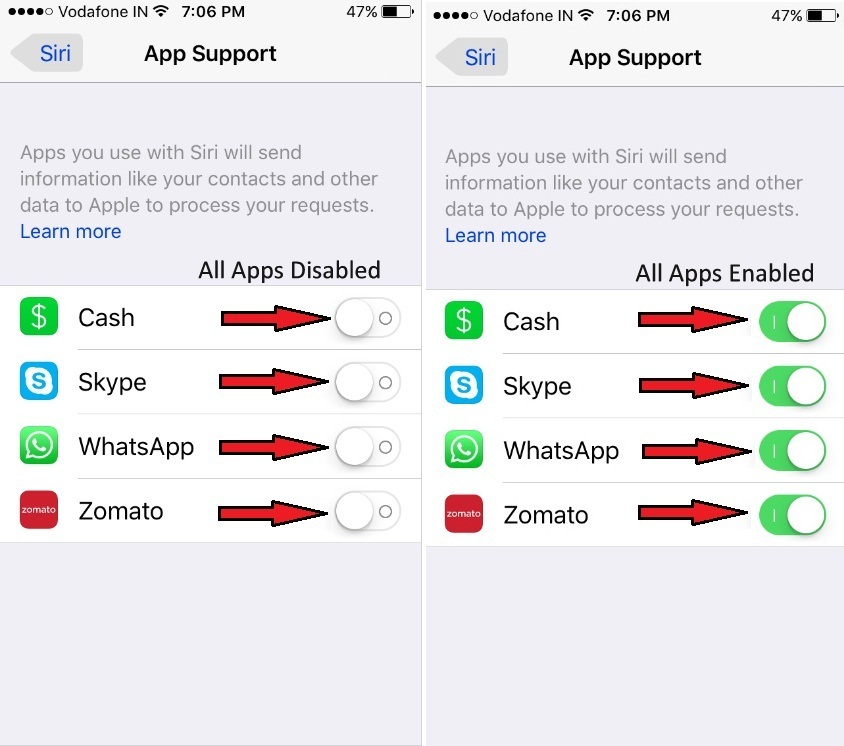 Follow these steps on your iPhone, iPad that running on the latest version of iOS.

In 11 Siri & Search, there are not App Support Settings; instead of it (App Support), Apple brought new Search & Siri Suggestions control for individual Applications.

How does work Search & Siri Suggestions in iOS?

It allows information from App (for example- Whatsapp) to appear in Search, Look UP, and Keyboard, Siri may learn from and make suggestions based on how you use this App.

How to disable Search & Siri Suggestions for individual App in iOS 11?

Go to the Settings App from Home screen– Now Find Siri & Search – Next up, scroll down the screen to navigate the particular application, then tap on App – You’ll get a toggle next to the App name – now turn toggle off/white.

Get More – how to Turn off Siri App Suggestions in iOS