So the time has arrived for new iOS update, i.e., iOS 12. The first question will arise in your mind is “Which devices will be compatible with iOS 12?” Before listing out the devices let’s talk about iOS 12. Before the official launching of iOS 12, the developers get the chance to use the developer beta version and then beta is publically released. If you’re short-tempered, then I would suggest you to not to download beta version because it contains many bugs and you will get annoyed in a short time.

We were expecting lots of features before iOS 11 was released publically and since Apple came across our expectations and gave more than expected. Likewise, now we are waiting for iOS 12 and its brand new functions. The company is following the same path since years of releasing the iOS along with a new iPhone or iPhone’s.

iOS 12 will probably include the most innovative features, improved camera quality, animated emojis and much more.

We can’t predict this year which kind of iPhone will be going to introduce in the market by looking at previous launching. An iPhone X was beyond expectations, and it is a dramatic device than any of the smartphones in the world with such a gorgeous appearance and advanced camera.

Every year new iPhone releases in the market along with new iOS. But what about previous iOS and iPhone, we can’t just leave them behind. We all know iOS is only available for Apple devices. The criteria of Apple is straightforward at a certain point it will not give any iOS update on the iPhone or iPad or iPod touch to increase their sell.

iPhone 5 and below devices were not given iOS 11 updates. From iPhone 5S onwards iOS 11 was available. Now for iPad, iPad 4th gen was not included in iOS 11 update, and iPod touch 6th generation was included for iOS 11. So by doing analysis, I have concluded some of the iDevice which is going to iOS 12 supported devices list. 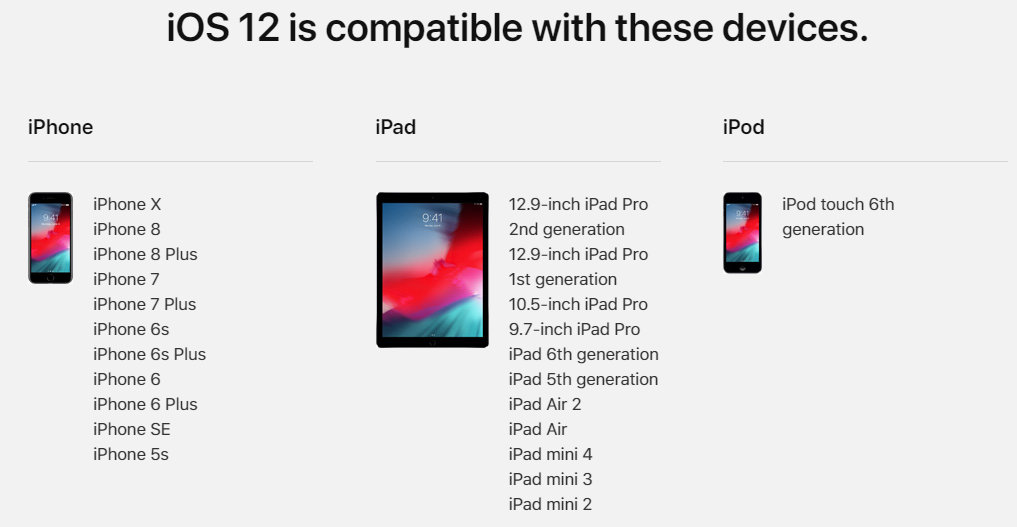 The bad news is iPhone 5 and iPhone 4S not get iOS 12 updates, and about iPod, currently, Apple has only one iPod in the market so it is impossible that iPod cannot receive an update.