Home » HOW TO » iOS vs Android: Differences between Android and iPhone

iOS vs Android: Differences between Android and iPhone

To whom you seek guidance while purchasing a phone? Well, you shouldn’t be asking anyone who doesn’t know about smartphones or partially aware. It’s not that simple, to choose between iPhone and Android. Both offer hundreds of amazing features that can really confuse the buyer which phone to buy. Therefore, we have made this article to get you close look at their differences and why the iPhone is best?

From hardware to security you will get each answer and hopefully, at the end of the article, it will be easy to decide which phone is worth spending money as well as a guide on Android vs iOS market share. Moreover, you can read this, 9 reasons Why Choose iPhone over Android.

iOS v/s Android: Which is best? 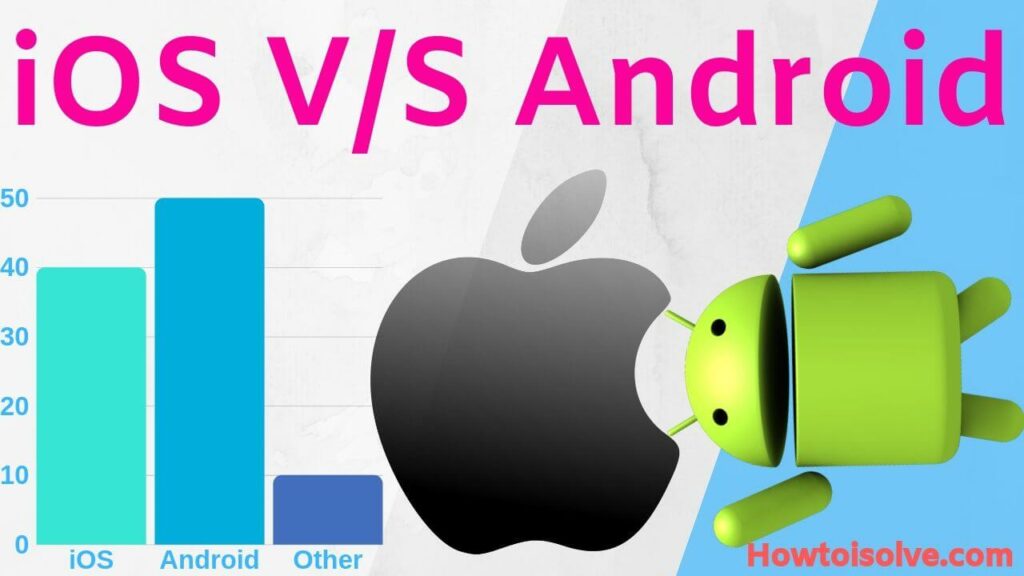 Hardware is the first place where user’s heart melts. Google allows its OS to multiple phone manufacturers like Samsung, LG, Motorola, etc, so every brand design their own design. Whereas Apple has full control over the design of iDevices, so Apple can construct software and hardware accordingly to make the best iPhone. No doubt, premium Android phones are as good as iPhone when it comes to hardware but cheaper Android phones have quality issues.

Do you know what is the best part of buying an iPhone? All you have to do is, select the iPhone model as per your budget and while buying Android phones, you have to look for the best brand as well as the best model. It is likely to create chaos, therefore iPhone is recommended. The choice is yours!

After spending thousands of bucks and unable to use the latest OS on the phone is unacceptable. Though, millions of Android users are tolerating cessations of Google’s OS, because only high-end smartphone users could have new updates on their phone. When we talk about iOS, Apple releases the updates every year for all the iOS devices. For instance, the iPhone 5S was launched in 2013, but still, it has support for iOS 11. According to the survey, 66% of iOS compatible devices had installed iOS 11 within 6 weeks of release.

On the other side, the Android Oreo 8.0 was only running on 0.2% of devices even after 8 weeks of release. So why spend money on the phone who doesn’t give the latest features, rather if you don’t have money, then wait for a month and buy an iPhone. At least you have the assurance to enjoy the latest updates on iOS.

The App Store has around 2.1 million apps while Google Play contains over 3.5 million apps (as of April 2018). However, Google Play isn’t that useful because we only need 60-80 apps on our phone, so here calculation doesn’t matter. Unfortunately, if you want to launch your App on the App Store then it isn’t that easy, compared to Google Play. Apple strictly follows the security of the user, so if your App is satisfying all the requirements listed by Apple then only you will be allowed to launch the app on App Store.

Almost all the applications are supported on an iOS device, and Android app developer has to develop the same app multiple times to make availability over a large number of devices. If you are gaming freak, the iPhone is still the best choice as developers give first priority to App Store because they get the response from users in a minimal time period.

#4. Gaming: All time fun Experience without freezing on iOS

As I said earlier, the game developers always look forward to launching their hard work on the iOS platform. Tens of thousands of games are available for millions of players to tend to play games on iPhone and iPod Touch. Hopefully, Apple will improve the hardware of the iPhone even more, so that gaming companies like Sony and Nintendo could release high-end games on the iOS platform.

The Android users have expectations that games have to be freely available on Google Play, therefore, developers always give first chance to iOS where they can make real money.

So in case if the battery is corrupted on the iPhone, the only option left for you is to get it replaced from Apple Store or experienced technician. You cant make any changes in storage capacity on iPhone or iPad, so user have to purchase the device estimating how much storage will they need in future.

#6. Android vs iOS security: in Today’s Era Security is #1 Point

Android vs ios security? Not a single phone in the market can beat the iPhone and iPad. 97% of viruses, worms and malware targets Android phones first, as it is easy to damage. Besides, the head team of Google’s Android did admit that “We cannot guarantee that Android is designed to be safe, If I had a company dedicated to malware, I should also be addressing my attacks on Android”.

Now you decide who is the winner?

As long as you have GPS along with good internet connection, you don’t have to ask people addresses or get lost. Both, Apple Maps and Google Maps are incredibly well and pre-installed on phones. However, you can download third-party applications on iPhone if you don’t like default Maps application. Even Google Maps is available for the iPhone, so there is no doubt or confusion among the best Maps for iPhone.

The network and carrier play a crucial role while purchasing Android or Apple phone. All the major carriers in the US, Verizon, AT&T, T-Mobile, and Sprint offer great deals for iPhone as well as Android phones. So, there is no point in selecting between Android and iPhone on the basis of Network & Carrier.

Soon all these carriers will be offering 5G network in iPhone when Apple will release the newest members in iPhone Family in coming days. Fortunately, Android users are currently experiencing 5G on the Samsung Galaxy S10 5G and many other devices.

If you are a type of person who used to change phone every year and sell the old one, the iPhone could give you better returns than Android. Since the iPhone are costly than Android, but you have an affirmation to get satisfactory resell value. So here iOS wins. You can get here source of Android vs iOS market share price.

Here are a few examples of Resell Value Comparison of iOS and Android,