Home » HOW TO » How to Delete Siri History and Dictation History on iPhone, iPad, and Mac: iOS, iPadOS and MacOS

How to Delete Siri History and Dictation History on iPhone, iPad, and Mac: iOS, iPadOS and MacOS

Now apple allows managing Siri Search and Dictation search history from the user’s device. that means we can delete all history from apple service that has been used for Siri command and voice command text through Dictation on keyboard. Siri and Dictation are now available on all Apple devices like iPhone, iPad, Mac, and Apple Watch. here’s how to delete Siri recording from apple’s server fro your iOS/iPadOS and macOS devices. That running on the latest version of iOS/iPadOS and macOS On iPhone/iPad and Mac.

First, I gonna show you how to turn off Siri search and Dictation after that from iPhone, iPad, and Mac.

Steps for Delete Siri & Dictation History on iPhone/iPad and Mac

Apple Will Accept your Request for “Siri and Dictation history will be deleted” with the popup showing on iPhone/iPad screen. 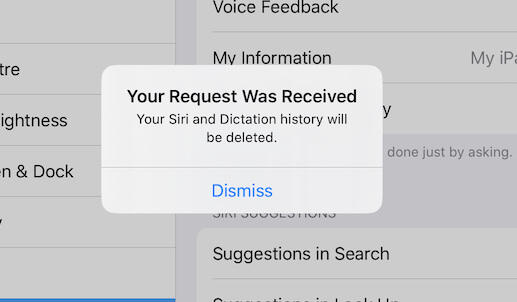 On iPhone/iPad: Turn off Siri Recordings from Apple’s Server

On Mac: Turn off Siri Recordings from Apple’s Server

On iPhone/iPad: Turn off Dictation Recording from Apple’s Sever

On Mac: Turn off Dictation Recording from Apple’s Sever

This settings for Siri and Dication Search recording can interrupt in understand the user’s experience while using Apple Device. After that User has more power regarding privacy. Above is three alternate methods to Delete Siri History on iPhone/iPad or Mac.