how to get camera access on snapchat in Settings iPhone

in this article, I will guide you all possible guide on Allow Camera Access to Snapchat on iPhone and Android and troubleshooting on the Snapchat camera issue for iOS and android mobile. “Unable to Access Camera” in the Snapchat app on iPhone or Android could be really annoying when we’re all set to take pictures/snaps on Snapchat. So on launching the Snapchat app, the pop-up will appear with the same error. Without camera access, Snapchat is a waste of time, so let’s fix the camera issues of Snapchat on iPhone and Android.

Most commonly the problem gets resolved by giving the camera access to the Snapchat app on iPhone and Android. In this short troubleshooting, we’ve mentioned how to enable a camera on Snapchat and  Fix Can’t Allow Snapchat to Access My Camera?

How to Enable Camera on Snapchat on iPhone, Android?

With the below steps, you could make sure whether Snapchat is allowed to access iPhone’s camera or not. And if Camera is disabled on Snapchat, you cannot use the camera on the Snapchat app.

That’s it. Don’t miss to get here snapchat hacks for iPhone 2020 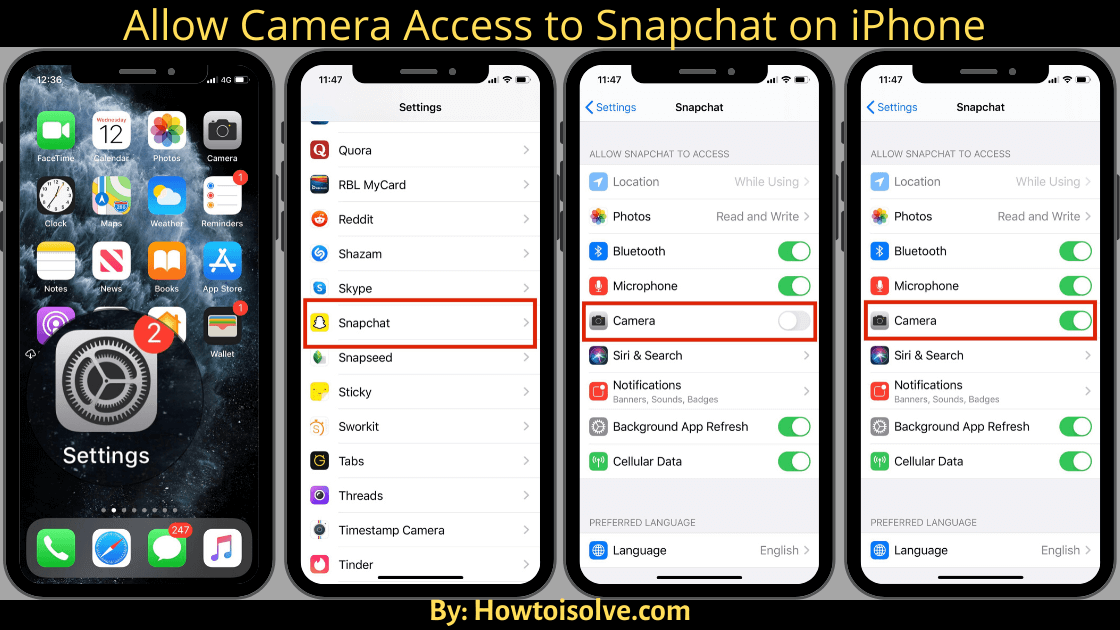 How to Enable Camera on Snapchat on iPhone

Way to Allow Camera Access to Snapchat on Android Phone,

in case it is already turned on on your android snapchat app, however, Snapchat Not Opening Camera by giving camera permissions on android.
kindly tun camera switch off, and a while, turn toggle camera on for android Snapchat. and then reboot your android phone. I hope this worked.

How Do You Get Camera to Allow Access to Snapchat but when you Press on the Privacy and Camera Snapchat Doesn’t Come Up?

If Camera Access is already given to Snapchat App but still Can’t Access to Camera on Snapchat, then you may have put the App Limit or Restrictions on Camera app or Snapchat on iPhone.

Solution 1: Check for App Limit is off under Screen Time for Snapchat App

If there’s an App Limit on the Snapchat app, and you’ve exceeded that limit for a day, Snapchat or Camera will show the error. So Remove any App Limit if it is there.

Likewise, Restrictions on Camera App should not be ignored while facing Snapchat camera issues on the iPhone.

If all permissions are correctly set for the Snapchat app but still can’t access the camera on Snapchat, then try this basic troubleshooting and fix the issue.

The very first trick that should be used to fix can’t access the camera on Snapchat is to force close the app itself and give a fresh start to the smartphone.

For iPhone 6S Plus or Earlier,

In order to get rid of bugs and errors, you should ensure to keep the app as well as the device up to date. If you haven’t done yet, then here’s how to check and update the iPhone/Android and Snapchat App.

Steps To Update firmware on iPhone,

Steps To Update software on Android,

To Update the Snapchat App,

Try to fix unable to open the camera on the Snapchat app iPhone by reinstalling the app.