How to Disable/Turn Off Handoff on iPhone, iPad & Mac, Apple Watch

In this tutorial, we will show you how to disable Handoff on iPhone, iPad, and macOS. The handoff is a very handy feature that lets you continue your work over iPhone, iPad and even on Mac from where you left. Mainly it works with Apple’s first-party applications like Safari App, Mail App, Calendar App, Contacts, Pages, Maps and few third-party applications too. There are iPhone users who didn’t like the Handoff feature and looking to turn off Handoff feature on iPhone, iPad and on Mac, Apple Watch.

No offense, but Handoff is an ideal solution if you really want to work on Apple ecosystem. Because it lets you continue your work on Mac right from where you left and vice versa. But, if you want to disable handoff on iPhone, then follow the below steps and disable it.

Why You Should Turn Off Handoff Feature on iPhone, iPad, and Mac?

The only downside of using handoff feature is, it cuts down the speed of Mac because macOS and iOS continuously sync apps and results in lagging and sometimes apps get stuck on Mac.

Also, Read – How to Manage Notifications in Mac OS

iPhone/iPad: Steps to Turn off Handoff on iPhone & iPad 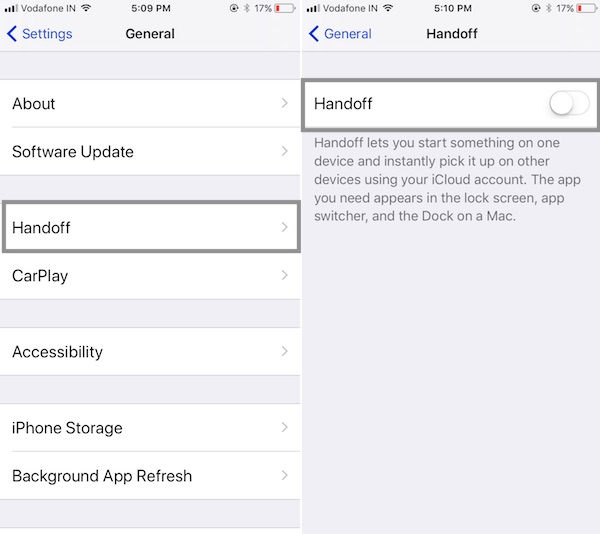 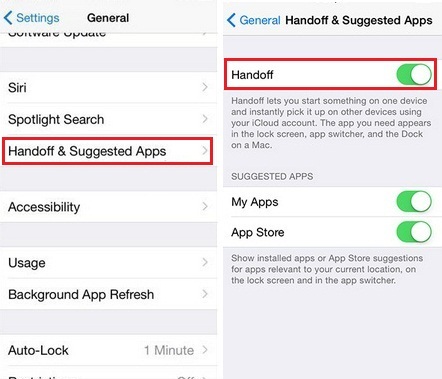 That’s it. Above way follow accurately so that defiantly Handoff will happen turnoff on your iOS 8 devices. If you want to again, Turn on Handoff then you can do it, with the help of this way Settings >> General >> Handoff & Suggested Apps and Turn on Handoff.

Mac: Turn off Handoff on Mac and Apple Watch

Apple Watch also supports the continuity feature, that allows Apple Watch users to use left on the app from Apple Watch to iPhone. When this is on, Your iPhone will pick up where you left off with apps on apple watch. Apps that support this feature appear on the lower-left corner of your iPhone lock screen. To use unlock your Mac with apple watch feature, You must enale Handoff on Apple watch first. After that on your Mac, Enable Hand off option that given above steps for Mac also enable Allow you apple watch to unlock your Mac under the Mac’s Security and privacy.

Handoff not working on iPhone, iPad, and Mac, Apple Watch?

Don’t worry, here are some quick tips that you should try to fix Handoff on iDevices.

These are few basic suggestions to fix handoff continuity not working on iPhone, iPad, and Mac. If they didn’t work, then visit the particular guide to fix Handoff not working.

How much helpful these tips on Turn off Handoff on iPhone to you. Leave your speech in the comment box and share your experience, you can get daily new update via – E-mail, just subscribe to our Email alerts.