How to Take Back Up before Update OS X in MacBook, Mac

Take backup from Mac is very easy task for Mac users. But for the new Mac user might be difficult that how to take back up before update OS X in Mac, Recently Apple released new Mac OS X update for your Mac device, that’s running on maverick OS X. You can’t update your Old Mac OS with new Yosemite. Before that you have to check it, you have Yosemite compatible device or not.

Note: Back up process will take back up of your photos, Documents, Software, Music, Settings on auto backup or manual backup process as well. 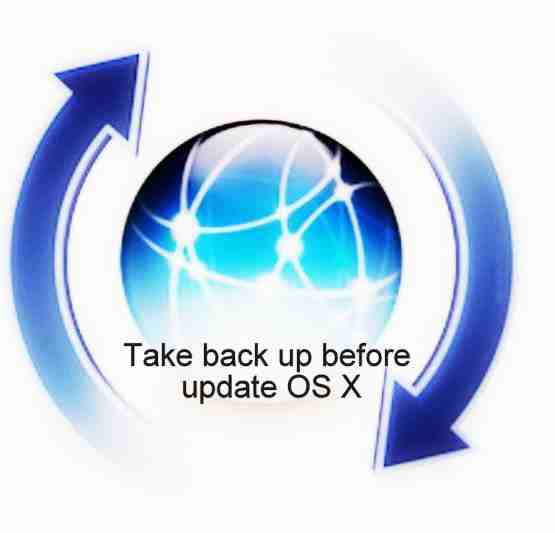 Take back up in your Mac

Mac configuration: How to Check System Configuration in Mac: Yosemite.

Devices those are compatible with new Mac OS X, Yosemite

Here are many alternative ways to update your Mac device with Yosemite like, Time machine, Time capsule, iCloud, Burn folder for CD and DVD, External hard disk or other hard disk fragment.

From the menu bar of Mac screen, Tap on Time Machine icon, from there you can see last backup details and more.

Now Select “Back Up now” option.

Now your job is done, take a rest that time will depends on how many updates on your Mac files (Document) and Folders.

As a plus point, Time machine is giving two different options to take back up before update OS X in Mac.

Note: From the finder view, you can easily find Time machine. Right click on Time machine icon and Tap Show on Desktop option.

Now you have Time Machine icon on Mac desktop, Right click on it.

You can use any of above methods as of your convenient way. For more alternatives of Take back up before update OS X in Mac device over here by apple. And give reply which is best way for you in below comment box.