Apple Watch Series 4 Won’t charge after watchOS 7 update? No worries, just give some more time to the Apple Watch and check if the charging process is resumed or not. Apple Watch doesn’t repair Apple watch if your Watch is under warranty or Our of Warranty. So, Don’t waste time behind repair. carefully read and fix your Apple Watch Charging issues. Usually, it happens when any malware attacked on a watch, or it can be a bug, or sometimes hardware is damaged. These are the possible reason why Apple Watch Series won’t charge.

For the first time when I faced this situation, it was difficult to time for me. Because once the battery drained, the watch will be power off automatically and we can’t use the fitness apps or necessary access apps right by raising the wrist. But for them with my experience of using the iPhone, I fixed Apple Watch won’t charge. Head over to fix yours. 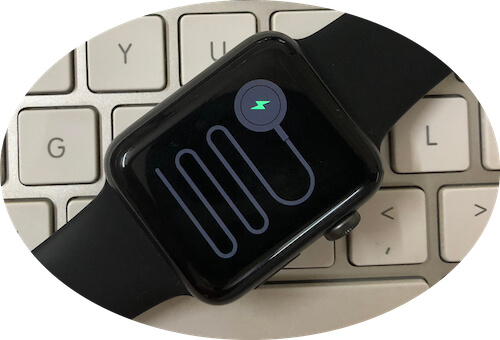 Your Apple Watch is Shown Red or Green Charging Snakes of death and stuck on the same screen. for getting out of the charging screen. You are not alone with the problem, 99% fixed these issues using this Do-It-Yourself technique. Don’t be afraid, Because this apple watch required enough charging. To-Do that, Keep your Apple Watch on Charge At Least 30 minutes.

Still, your Apple Watch Screen stuck on Green snake, Then Press and Hold Both Digital Crown button and Side button until you see the Apple logo on the screen. Now Your Apple Watch is normal, and Use it means you will access apple watch home screen after 10 percent of charging.

Try cleaning the magnetic charger that came with Apple Watch Series 4 and then again places the watch to charge the watch. Also, you can change the adapter and connect it with iPhone’s adapter or any other adapter. Still, the problem persists, then change the charger or you can borrow it from your friend for testing purposes.

Sometimes a faulty or new looking Power adapter won’t work (possible internal damage or electric issue) as we expect but buy a new power adapter or borrow one from your friend and test it out. if it is charge with your friend cable then this is the right time to change your Apple Watch charging cable and adapter. 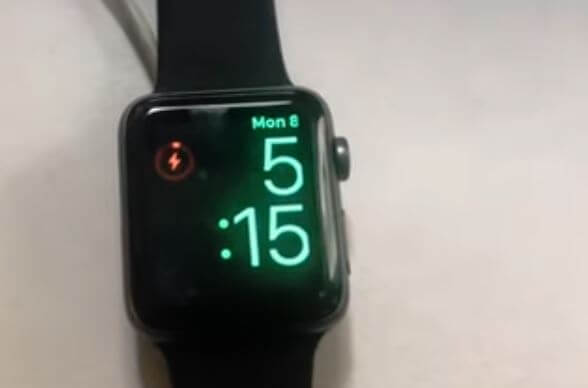 If you are Suffering from Battery Drain issues

Check if anything is interrupting the Apple Watch and magnetic charger, to make sure to take a thin cloth and clean the watch and charger. Alternatively, uncover the case from the Apple Watch.

Some cheap and unofficial apple watch case interrupting the charging connector of Apple watch. Some People are not using this best Apple Watch Waterproof case.

Remove Wrapper Around The Watch

If you have bought the Apple Watch Series 4 recently and it won’t charge, then you should check if there is any thin plastic left on it. This Apple Watch is wrapped in plastic to prevent scratches. Hence you must carefully look at the Apple Watch and remove plastic from it.

Also, Cleanup the back charging part using fiber cloth. That will remove sweat or any chemical Froze and overlay. Also, clean The Apple Watch Charging Pad.

It might be possible that the socket that you are using to plug the adapter is defective or not transmitting enough power supply. There are two ways you can verify one is to try alternately available socket, and the other is to connect the magnetic charger into the laptop or computer or power bank. 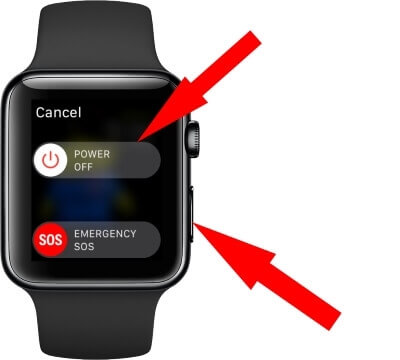 How to turn off apple watch 4 when not charging

Step #1: Press and hold the Power button and Digital Crown until you see the Apple logo on the screen.

Now, Tripple Click on the Digital Crown button to turn on VoiceOver on Black Screen Apple Watch. Speakable content will listen to you if Watch is on but the screen in Black.

That might cause the Hardware issues, take your apple watch to Apple Store as soon as possible. Request for Replace Apple Watch is it’s under warranty.

According to Apple Watch Support guideline, Apple Doesn’t repair Apple Watch parts on damage or replace internal parts for example Battery, Speaker, and more. Apple will give another apple watch in free if your apple watch terms and conditions are followed as expected. Before contact apple support check your Apple Watch Warranty status online. That’s it.

The last option left is to restore the Apple Watch to fix Apple Watch Series 4 not charging after the update. When it comes to resolving errors in Apple Watch, this trick never disappoints the user. In return, you will have to lose your data and set it up again. To prevent data loss, you can take a backup of the Apple Watch.

Erase All Contents and Settings After that Repair with the same iPhone that will restore the old backup as it is.

Might be is there a problem like After Swimming apple watch is not charging. Checkout at a nearby apple store or service department.

After trying all the above solutions, you are unsuccessful in resolving Apple Watch won’t charge then it’s time to contact the genius bar at Apple Support, You can book free appointment on-call or Chat, Or Get the Replacement of your apple watch if the problem is big and under warranty terms and conditions.