Home » HOW TO » How to Take Screenshots on Mac Running macOS Big Sur, Catalina, Mojave

HOW TO
jaysukh patel
SaveSavedRemoved 1

Taking screenshots was quite typical before Apple launched Mojave and its unbelievable features. In macOS, you will get simplified tools to take screenshots, record video, edit screenshots, and more. No need to download third-party applications to do such editing and recording, now it is available on Apple Mac. Let’s see Mac Shortcuts Screenshot for the latest macOS.

Let’s check out how to take screenshots in macOS and also how to record screen your on Mac and much more.

How to Take Screenshots in MacOS

How to edit screenshot in macOS

How to show mouse cursor in screenshots in macOS

How to select save location for screenshots in macOS 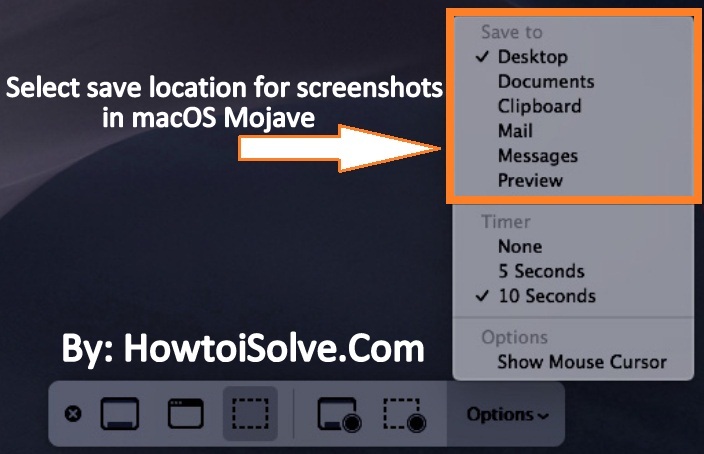 Get more: Hidden way to take a screenshot on your Apple Tv

How to Set Timers for Screenshots on Mac, MacBook

Get More: Fix Screenshot not working on Mac

As a screenshot capture tool on Mac, you can use Lightshot on mac. For that, you will have to download and install Lightshot on mac, from your Apple mac App store. And then learn here,

then re-open the program and then use a tool from the top menubar on your mac. 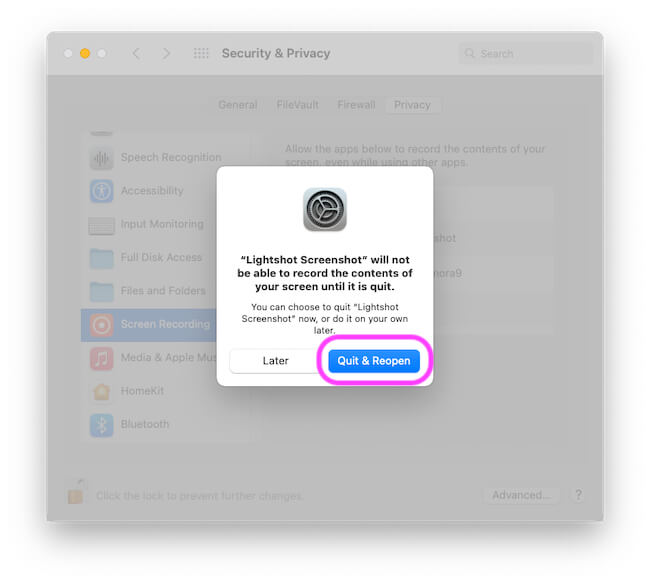 How to Take Screenshot with Lightshot on Mac

How to Crop Screenshot on Mac After Saved

If you forget to crop the screenshot after taking it on Mac, MacBook, there are plenty of ways to crop screenshot on Mac after saved. Here’s how.

Method 2: From The Photos App

Meanwhile, if you have third-party applications like Adobe Photoshop, they also support such operations and editing tools.

How to Draw on a Screenshot on Mac

The Markup toolbar contains various tools to edit the images and make them your own. After taking a screenshot, if you want to draw anything on Mac Screenshot, it can be done from the Markup Toolbar.

How to Highlight Text in Screenshot Mac

Do you want to highlight a certain part of the screenshot, Markup Toolbar offers the Highlighter tool too. It helps to rectify the text if you’re preparing for an examination or want to mark the point.

How to Reduce Screenshot File Size on Mac Without Lossing Quality we have Separate options that we have to set before export from the Preview app. That’s easy but you might lose the quality of your Picture after Resize file size and Change the Resolution. Follow the below steps,

How to Enlarge a Screenshot on Mac: Use Zoom Magnification Tool Mac

Sometimes it’s necessary to show the enlarged part of the screenshot, and it is possible with the Preview Markup Toolbar. If you haven’t done it yet, here’s how to do it.

How to Markup a Screenshot on Mac

The best part of using Mac, MacBook is Apple offers almost all the tools as pre-installed, while on other desktops, we’ve to download or purchase the third-party tools. One of the greatest tools of Apple Mac is Markup Toolbar, which offers numerous tools and options to edit the pictures. 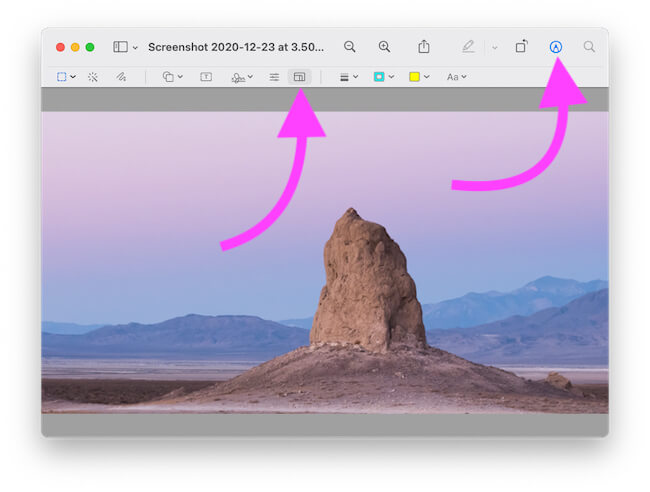 When you open any Picture or Screenshot in Preview Mode, just click on Show Markup Tool to enable all the tools. From Regular Selection to Drawing Freehand, or Highlighting the document, everything is present in the Markup toolbar.

How to Screenshot on Mac Without Keyboard

While the quickest way to take a screenshot on Mac is by using Keyboard, however, if your keyboard is not working or there’s a problem with keys, Mac lets you capture screenshots without using keys.

There is not much difference in taking screenshots on MacBook, Mac using a Windows Keyboard, however, instead of using the Command key, with Windows Keyboard, you’ll have to press the Windows button, everything else is the same.

Unfortunately, there is no straight setting available that lets you change the screenshot resolution on MacBook, Mac. 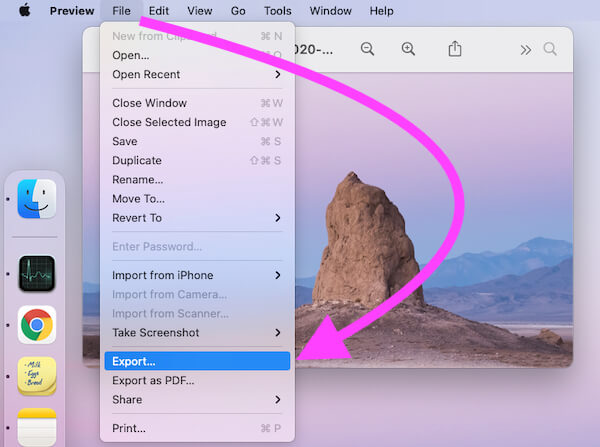 Save Preview File on Mac or MacBook

However, you can change the Screenshot File Format to JPG, PNG, GIF, PDF or TIFF, and get the desired results. Alternatively, using any third-party Photoshop app would allow you to increase or decrease the resolution. 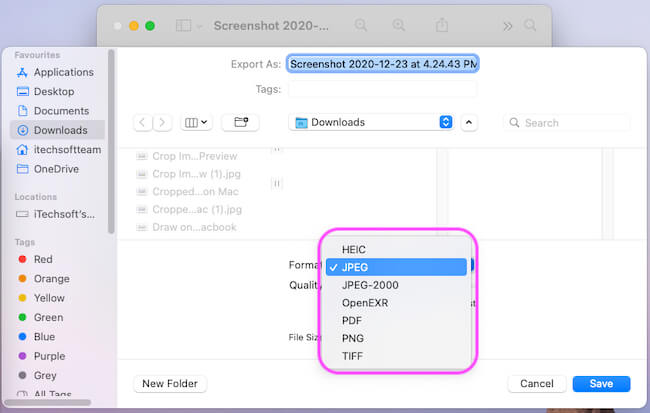 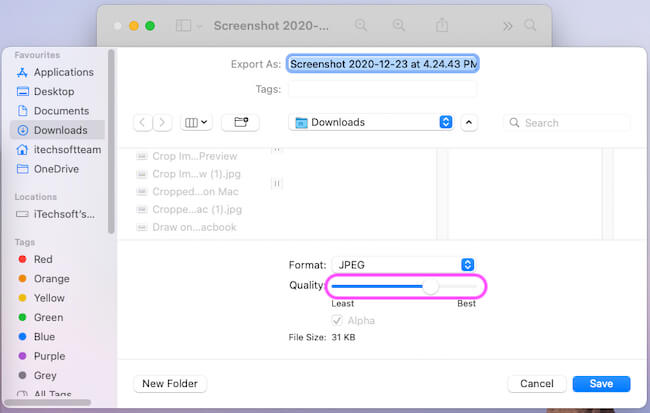 How to Copy and Paste a Screenshot on Mac

Instead of saving and moving the screenshot to another tool, why not copy the Screenshot to Clipboard and paste it on the desired app or location. That might be Your Browser, Photo Editing tools or Share on Social using the Paste option. 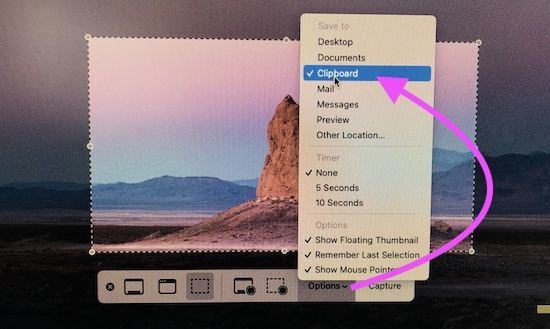 The alternate way is, Hold the Control Key while taking screenshots and paste wherever you want. Alternatively, with Universal Clipboard, you can paste it on any other Apple device.

Where Do Screenshots Go On Mac?

By default all the screenshots stores on the Mac Desktop, like Screen Shot [date] at [time].png. But to keep the desktop tidy, you can manually change the location from the desktop to any other folder.

Where Do FaceTime Screenshots Go on Mac?

Where Do Minecraft Screenshots Go On Mac?

You can locate Minecraft Screenshots on the following path in Mac, MacBook,

Open Finder on Mac, Click on Go > Go to Folder.. from top Menu. and Enter the Bellow folder path to locate Mincecraf Screenshot on Mac or MacBook. 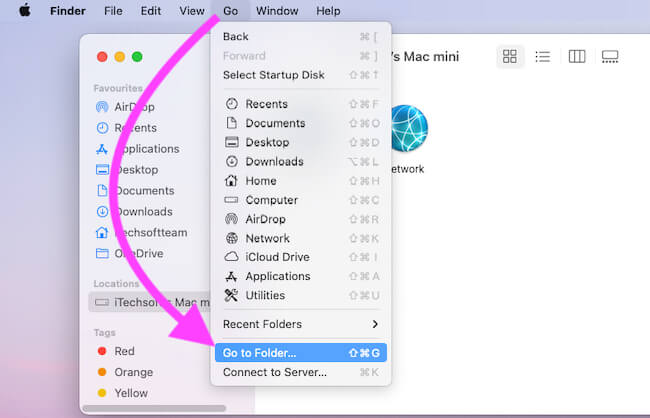 How to Change Mac Screenshot Save Location

If you don’t want to save the screenshot to Desktop, then create a folder and set it as Screenshot Save Default location on Mac. 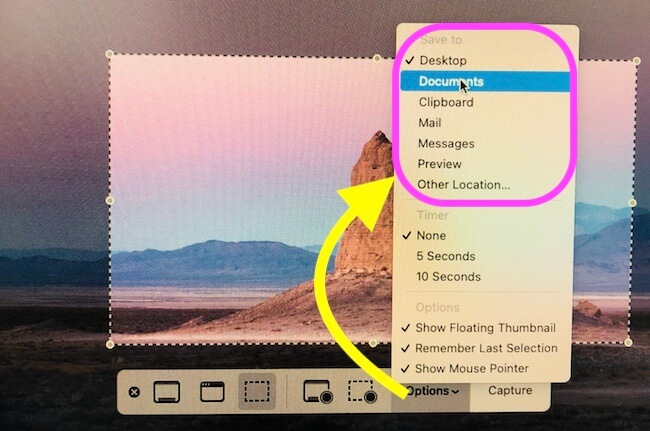 Select Screenshot Default Save Location on Mac and MacBook

For macOS Mojave or later, launch the Screenshot App and click on the Options. And change the default location from there.

Read more: How to Print Screen on Mac

That’s all about new tips and tricks for Screenshot take on your Macbook, Mac running on any macOS Version.