Home » TIPS AND TRICKS » AirDrop not working on Mac Big Sur, Catalina, Sierra, EI Capitan with iOS or Mac how to fix?

AirDrop not working on Mac Big Sur, Catalina, Sierra, EI Capitan with iOS or Mac how to fix?

A great feature AirDrop makes a wireless path to share content between nearby people with Apple devices. It can transfer content such as Photos, Videos, locations, and more very speedily. Whether AirDrop is a pretty feature but sometimes it also does nasty behave. Mostly After upgrading Mac OS and iOS. There are numerous users having problems AirDrop not working on MacBook Pro, Mac after the update.

It neither works between iMac to iPhone macOS Big Sur or other macOS and iOS 14/iOS 13 or earlier. If you’re one of AirDrop not working, then we offer you potential troubleshooting steps. Before starting the following steps at least you need to know everything about which Apple device supports AirDrop.

Read More: How to fix Airdrop missing on iPhone

Before using AirDrop, make sure your MacBook or Mac belongs to the list of AirDrop Compatible devices.

Alternatively, if you’re AirDrop-ing files to iPhone or iPad or iPod Touch the following requirements must be met.

Airdrop does work with turn on Wi-Fi and Bluetooth. Check out your Mac Wi-Fi (internet connection), and Bluetooth is in enabled mode. In Addition, AirDrop turns on automatically when Bluetooth and Wi-Fi are on. To Share content by AirDrop, you need AirDrop On at both side Sender and receiver.

If you’re dealing with an endless loop of converting files while sending over the AirDrop, you’re at the right place. By changing only one set of the iPhone, you can get rid of this error in a single shot. Here’s how it can be done. We’ve found that the new formats are only available on iPhone 7 and later.

Photos and Videos that are already stored on the iPhone and iPad won’t be affected by these settings, but the new photos and videos will be saved in the most compatible format, so you won’t have to face with Converting error.

Nearby iOS device doesn’t appear in AirDrop Finder, then Once restart the iOS device (iPad or iPhone).

For iPhone 8 or later:

For iPhone 6S or earlier,

Solution 2: Make sure both devices are connected to the Same Wi-Fi & Bluetooth is enabled

This is the basic rule to use the AirDrop among Apple Devices, but if you are a newbie to Apple products then you might not be aware of this. Also, in some cases, where there is more than one Wi-Fi network, our Mac and iPhone automatically switch to the strong network connection. Make sure your Mac and other Apple device are connected to a similar Wi-Fi network.

Also, turn on the Bluetooth on Mac and iPhone.

If you can’t find the Mac in the AirDrop discoverable devices list on other Apple devices, then make sure the AirDrop Visibility Settings for your MacBook is set to Everyone. With this, all the other devices will be able to find the Mac within range.

Think of a case; running the MacBook on macOS Mojave and using AirDrop on iPhone updated to latest iOS 14 or later, what will happen? The outdated software of the Mac will create compatibility issues between the iOS and macOS, and certain default functionalities will stop working.

Before you end up with any other problem, update the Mac.

Solution 5: Turn Off Do Not Disturb

It’s obvious that while Do Not Disturb is enabled, Mac and iPhone won’t let you use the AirDrop. Even if you try to send or receive files on the Mac or iOS device, it’ll stay invisible and of course undiscoverable.

Turn off the Mac, and press the Power button to turn it on. Immediately hold the Option + Command + P + R (for at least 20 seconds) until you hear the second startup chime on the Mac.

Solution 8: Make disable Block all incoming communications inside the firewall

You wanna use AirDrop on your Mac to Mac or Mac to iOS 9.2 or later then you need turn off ‘’Block all incoming communications’’ in the firewall. To check that follow the below steps. Please Note: To make changes Admin authentication must require Meanwhile the process. 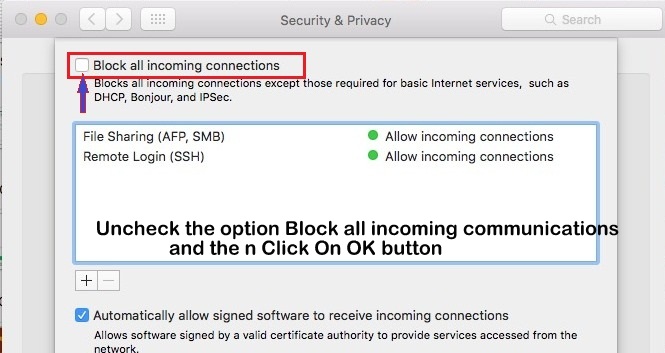 Hope you can see your Mac AirDrop name on other Apple Device. Even still the AirDrop not working on Mac EI Capitan then you should try given an alternative.

That’s it. Now try again to sharing content on Mac via AirDrop. Hopefully, your problem AirDrop not working on Mac EI Capitan, macOS Sierra would be solved.

Only One AirPod Working At a Time? Here’s the Fix