How to close or Stop unresponsive app on iPhone, iPad – iOS 8.1

If an app is not responding on your iPhone, iPad or iPod touch iOS devices then, you can use this way to kill or stop unresponsive app. no matter to close single or multiple app at a one time. Generally, you should know that shortcut way for quite the app when its’ not give response to you almost happen this issue whenever device going hang.  Multi tasking and multi gesture both are intelligent feature of the Apple’s iOS devices. You can use this same tip for iPhone 6, iPhone 6 plus, iPhone 5, 5S and earlier iPhone model as well iPad & iPod touch which are running on iOS 8 and iOS 7.

You can kill or close up to three app at a time. Just summon multitasking screen on your iOS devices and swipe up the app which you want to close that’s it. Nothing more but read more for this way step by step at bellow.

Steps for stop unresponsive app – multiple or Single app at a time on iPhone, iPad – iOS 8.1

Step 3. Swipe left to find the app which you want to close

Step 4.  Just touch on the app and swipe up side of the screen 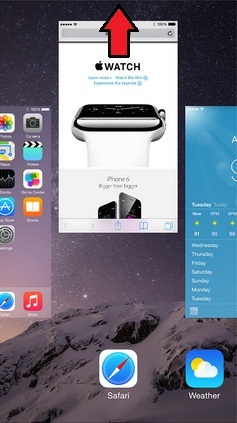 That’s it. Very easier to do it but once try yourself after you can understand what this story actually. Let’s, now share your replay and to know us, after stop unresponsive app successfully on your iPhone or iPad, how does it work for you?